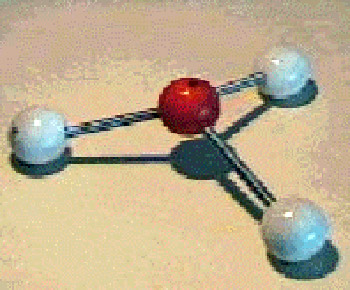 Ball-and-stick model of ammonia. An ammonia molecule is a tetrahedron with a nitrogen atom at the apex above the plane formed by three hydrogen atoms. 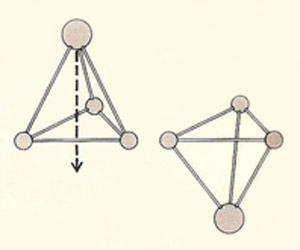 The nitrogen atom in an ammonia molecule can oscillate from one side (left) to the other (right) through the plane. As a result each level of the rotational energy, J, is split into two closely spaced levels.

Ammonia (NH3) is a colorless, pungent acid gas which is highly soluble in water; it is a covalent hydride and the fully reduced form of nitrogen. The density of ammonia is rather less than that of air, so that it can be "poured" upwards. Ammonia's properties have typical anomalies (e.g., higher boiling point than would otherwise by expected) due to hydrogen bonding. Liquid ammonia is a solvent. Ammonia is also a base; its aqueous solution contains ammonium hydroxide, and is used as a household cleaning fluid.

The pyramidal ammonia molecule turns inside out very rapidly, which is the basis of the ammonia clock.

Ammonia is produced industrially by the Haber process. It is used as a fertilizer, a refrigerant, in the Ostwald process, and to make ammonium salts, urea, and many drugs, dyes, and plastics.

Ammonia does not burn in air, neither do other substances continue to burn in ammonia. However, in oxygen ammonia burns with a greenish flame.

Ammonia reacts with acids to form the ammonium series of salts, containing the NH4+ ion. The nitrogen atom in ammonia has a spare pair of valence electrons with which it can form a bond with an additional hydrogen atom. The resulting ammonium ion behaves chemically like an ion of sodium, though the base ammonium hydroxide (NH4OH) is much weaker than its counterpart sodium hydroxide. This makes it more useful for biological reactions, which generally involve only small energy transfers.

Ammonia forms ammine (NH3) ligand complexes with transition metal ions, and yields amides and amines with many organic compounds. The quaternary ammonium salts, NR4+, are made by alkylation of tertiary amines and are used as antiseptics.

Ammonia can be made on a small scale by mixing together powdered calcium hydroxide (slaked lime) and powdered ammonium chloride, and then heating the dry mixture. Ammonia gas and water vapor are given off leaving calcium chloride behind. The gas is dried by passing it up a tower containing quicklime.

Also known as hartshorn or the volatile alkali, ammonia was one of the few substances known to the chemistry of the ancients (see alchemy); being referred to by Pliny under the name of vehement odor, which he evolved by mixing lime with nitrum (probably sal ammoniac – ammonium chloride). It derives its name "ammonia" from its being obtained from sal ammoniac, which was first procured by heating camels' dung in Libya, near the temple of Jupiter Ammon.

Ammonium carbonate (NH4CO3) is a colorless crystalline solid made by combining aqueous ammonia and carbon dioxide. Formerly known as sal volatile, it was the main ingredient of smelling salts.

Ammonium chloride (NH4Cl) is an ammonium salt of hydrochloric acid. Formerly called sal ammoniac, it is a volatile, highly soluble white solid, made by reacting ammonia with hydrogen chloride. It is used in dry batteries and is a mordant in the dyeing and printing of cloth.

Ammonia occurs in the atmospheres of gas giant planets and as widely scattered molecules in interstellar molecular clouds. The fact that ammonia has similar physical properties to those of water has led to suggestions over the past few decades that ammonia-based life is a possibility.