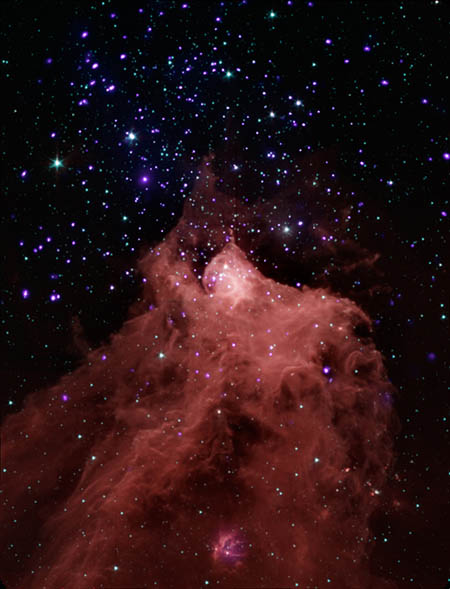 Fig 1. The Cepheus B molecular cloud, located about 2,400 light-years from Earth. This is a composite image, combining data from the Chandra X-ray Observatory and Spitzer Space Telescope. The Spitzer data, in red, green, and blue shows the molecular cloud (in the bottom part of the image) plus young stars in and around Cepheus B, and the Chandra data in violet shows the young stars in the field. Image and text: NASA/CXC/JPL-Caltech/PSU/CfA. 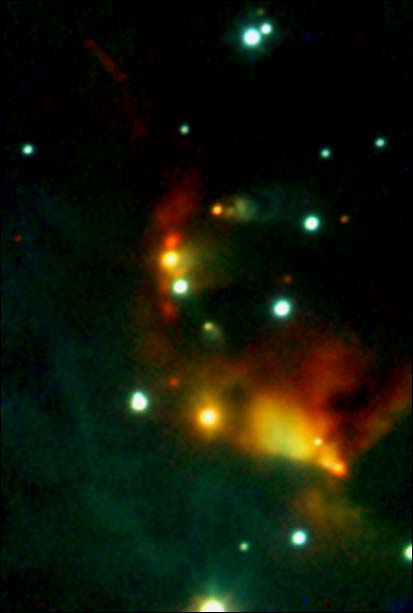 Fig 2. A region in Orion which includes the molecular cloud OMC2, or Orion Molecular Cloud 2, shown as a JHK (J=blue, H=green, K=red false color) composite image. OMC2 is a small, dense cloud located within the much larger Orion star forming complex. OMC2 is extremely young, and is known to contain a compact cluster of infrared sources as shown here. The five discrete infrared sources seen as bright spots in the red nebulosity are named IRS1-5; IRS1 is on the lower right of the horizontal bar of nebulosity below center to the right of this frame. IRS1 exhibits colors and structure indicative of a circumstellar dust shell resulting from a bipolar outflow. Throughout this image, and especially with source IRS2 at the upper right of the embedded OMC2 sources, can be seen cavities and flow patterns in the nebulosity, giving clues to the structure and dynamics of this active star forming region. Credit: I. Gatley, M. Merrill, National Optical Astronomy Observatory.

A molecular cloud is a cold, dense interstellar cloud that contains a high fraction of molecules, of which close to 200 different types have been discovered in space (see interstellar molecules). It is widely believed that the relatively high density of dust particles in these clouds plays an important role in the formation and protection of the molecules.

The emission of molecular lines often shows several distinct intensity peaks, each representing individual clumps or clouds of gas and dust in a region that may extend in total between about 15 and 600 light-years across and is often associated with T Tauri stars – young, pre-main-sequence stars – and also hot massive stars and the ionized gas around them. Two distinct types, of molecular cloud are known, both associated with star formation: giant molecular clouds and dwarf (or small) molecular clouds.

A giant molecular cloud (GMC) is a large complex of interstellar gas and dust, composed mostly of molecular hydrogen but also containing many other types of interstellar molecule (Fig 2). GMCs are the coolest (10 to 20 K) and densest (106 to 1010 particles per m3) portions of the interstellar medium. Stretching typically over more than 100 light-years across and containing between about 100,000 and several million solar masses of material, they are the largest gravitationally-bound objects in the Galaxy and, in fact, the largest known objects in the universe made of molecular material. Molecular clouds are the only places where star formation (and planet formation) is known to occur. The other types of interstellar clouds, in which hydrogen is atomic, are too warm and diffuse to allow stars to form. Since star formation occurs when deeply embedded clumps of interstellar gas and dust collapse, stars that are newborn or in the very process of forming are always obscured from direct optical view, and the only source of information from inside these clumps is provided by longer-wavelength radio waves and infrared emitted by molecules.

What happens when stars begin forming in GMCs depends on the environment. Under normal conditions in the Milky Way and in most other present-day spiral galaxies, star birth stops after a relatively small number of stars have been born because the stellar nursery is blown away by some of the newly formed stars. The hottest of these heat the surrounding molecular gas, break up its molecules, and drive the gas away. As the celestial smog of gas and dust clears, the previously hidden young stars become visible, and the molecular cloud and its star-birthing capability cease to exist. GMCs in colliding galaxies may experience a different fate. As the collision crunches the interstellar gas and stars form at an accelerating rate, the gas pressure around the surviving GMCs increases 100- to 1,000-fold. Calculations suggest that the hot surrounding gas can trigger rapid star birth throughout the clouds by driving shock waves into them. The several hundred thousand stars that form from the cold molecular gas in such clouds use up most of the gas before it has time to be heated and dispersed. The result of such violent events is the nearly complete conversion of GMCs into rich star clusters, each containing up to 1 million stars. Observations by the Hubble telescope suggest that many of these newly born star clusters remain bound by their own gravity and evolve into globular clusters, like those observed in the Milky Way's halo.

A dwarf molecular cloud (DMC), or small molecular cloud, is much smaller and denser than a giant molecular cloud but may still be the scene of star formation. DMCs have masses of less than 1,000 solar masses confined within regions that are about 5–15 light-years across. Like giant molecular clouds, they are exceptionally cold objects, with temperatures of just 10–20 K. Because DMCs are not restricted to the spiral arms of the Galaxy, they can probably survive one or more galactic rotations and thus have lifetimes of 100 million years or more.