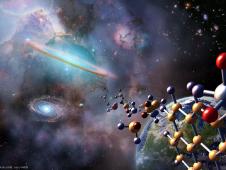 More than 140 different varieties of molecules have been found in the interstellar medium, ranging in complexity from molecular hydrogen (H2), which is also by far the commonest molecule in space, through other familiar ones, such as water, hydrogen cyanide (HCN), nitrous oxide or 'laughing gas' (N2O), and ethanol (CH3CH2OH), to esoteric carbon-chains known as cyano-polyynes, the biggest known of which is HC11N. In addition, there is strong evidence for even larger aromatic (carbon-ringed) molecules called polycyclic aromatic hydrocarbons, or PAHs. Some molecules, such as HCO+, were not even known on Earth at the time of their detection in space.

Because chemical bonds holding molecules together are sensitive to high-energy radiation and high temperatures, molecules are found in cool astronomical environments such as the dark interior of dense interstellar clouds and in expanding envelopes around dying red giants (and also in comets and planetary atmospheres). Most of the molecular material in our galaxy and elsewhere occurs in giant molecular clouds (GMCs). Within these, the greatest concentration and diversity of molecules are found in pockets, known as hot cores, near certain recently formed luminous stars. Hot cores are very compact (fractions of a light year), warm (a few hundred K, compared to 10 or 20K for the general interstellar gas), and dense (more than 106 hydrogen molecules per cubic centimeter) condensations with remarkably rich millimeter-wave emission-line spectra. They also show up as powerful infrared objects. The Orion Nebula contains two hot cores, which, being the nearest such objects, are also the most well-studied.

Interstellar molecules are formed through a complicated network of chemical reactions in situ, inside the interstellar or circumstellar clouds where they are found. Crucial to their synthesis is the presence of dust grains. The icy surface of these grains both shields molecules from stellar ultraviolet that would otherwise disrupt the chemical bonds and provides a surface on which atoms, radicals, and molecules can congregate and interact. Laboratory studies have shown that not only simple molecules can be made in this way but elaborate molecules (yet to be detected in space) that may be important in the origin of life itself. Among the molecules of biochemical interest already detected in the Sagittarius B2 cloud, near the center of the Galaxy, is glycolaldehyde (C2H4O2), a simple sugar that can combine with other molecules to form the more complex sugars ribose and glucose. Ribose is a building block of nucleic acids such, as RNA and DNA, which carry the genetic code of living organisms. Observations also suggest the presence of glycine, the simplest amino acid (a chemical unit of proteins), in Sag B2.