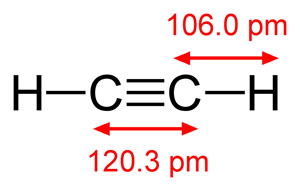 Bond lengths in the acetylene molecule.

Alkynes, also known as acetylenes, are acyclic branched or unbranched hydrocarbons having one or more triple carbon-carbon bonds. In systematic chemical nomenclature alkyne names end in the suffix -yne. The general formula is CnH(2n+2)-4x where x is the number of triple bonds.

Monoalkynes – alkynes that have only one triple bond and the general formula CnH2n-1 – form a homologous series: ethyne (acetylene), CH=CH, propyne, CH3CH=CH, etc. They are prepared by elimination of two hydrogen halide molecules from a dihaloalkane.

Alkynes physically resemble the corresponding alkanes, but chemically their properties are due mainly to the triple bond, and are similar to those of the alkenes. Addition reactions take place in two stages, forming first a substituted alkene and then a saturated alkane. The triple bond being nucleophilic (see nucleophile), alkynes add to unsaturated compounds such as aldehydes or ketones. Alkynes readily polymerize to various products, including aromatic and alicyclic compounds.

Acetylene (C2H2), also known as ethyne, is a colorless, odorless, flammable gas prepared by the reaction of water and calcium carbide (or acetylide) and manufactured industrially by the cracking of petroleum fractions. It is a very weak acid. Acetylene is the first member of the alkyne series.

Acetylene may explode when under pressure, so is stored dissolved in acetone. When burned with oxygen, it produces extremely high temperatures, up to 3,480°C (6,300°F), and is therefore used in oxyacetylene torches for cutting and welding metals. It is also used in lamps, and in the synthesis of acetaldehyde, vinyl compounds, neoprene, rubbers, and various solvents and insecticides. In high concentration of 40 volumes per cent and higher it has the effect of an anesthetic.