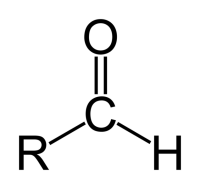 General structure of an aldehyde. 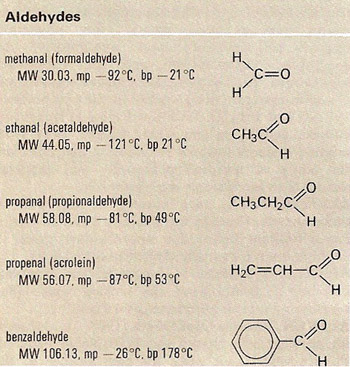 Properties and structures of some aldehydes.

An aldehyde is an organic compound that contains the –CHO (aldehyde) group, i.e., an unsaturated carbonyl group (C=O). Aldehydes are formed from alcohols by either dehydrogenation or oxidation. The word "aldehyde" comes from al(cohol) + dehyd(rogenation).

All the names of aldehydes end in –al. The simplest aldehydes are methanal (also known as formaldehyde), HCHO, and ethanal (acetaldehyde), CH3CHO.

Many aldehydes occur in nature and are often responsible for the flavor and scent of animals and plants. Aldehydes are highly reactive, and find many uses in industry in the preparation of solvents, dyes, resins, and other compounds. Aromatic aldehydes, such as benzaldehyde and vanillin, are used in dyes and as perfumes and food flavorings.

Aldehydes can be formed by dehyrogenation or oxidation of primary alcohols; further oxidation yields carboxylic acids (if ammoniacal silver nitrate is used, a silver mirror is formed). They can also be formed by reduction of acid chlorides. They are reducing agents and tests for aldehydes include Fehling's solution and Tollens' reagent.

Fehling's solution is a reagent composed of copper (II) sulfate, Rochelle salt (see tartaric acid), and sodium hydroxide, used in chemical analysis to detect aldehydes (and distinguish them from ketones), including some sugars. It is reduced to a brick-red copper (I) oxide precipitate, from whose amount the quantity of sugar can be determined.

Tollens' reagent is an ammoniacal solution of silver oxide which is used as a test for aldehydes, which, unlike ketones, cause the deposition of a silver mirror.