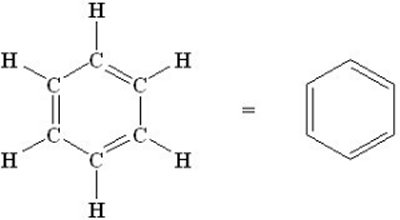 Fig 1. Benzene is often drawn as a ring of six carbon atoms, with alternating double bonds and single bonds. This simple picture has some complications, however. Carbon-carbon single bonds are longer than carbon-carbon double bonds, so if there were "real" single and double bonds in the molecule, the shape of the benzene molecule would be a distorted hexagon. 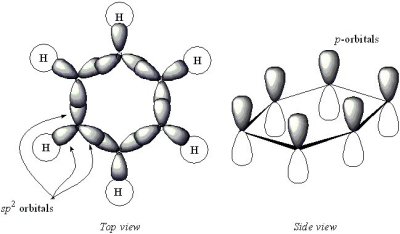 Fig 2. What is actually found is that all of the bond lengths in the benzene rings are 1.397 angstroms, which is roughly intermediate between the typical lengths of single bonds (~1.5 Å) and double bonds (~1.3 Å). All of the carbon atoms in the benzene rings are sp2-hybridized: the overlap of the sp2 orbitals around the ring produces a framework of six sigma bonds, while the unhybridized p-orbitals which are perpendicular to this plane overlap in a side-to-side fashion to form three pi-bonds. These pi-bonds are delocalized around the ring, leading to an unusual stability for the benzene ring compared to other alkenes. 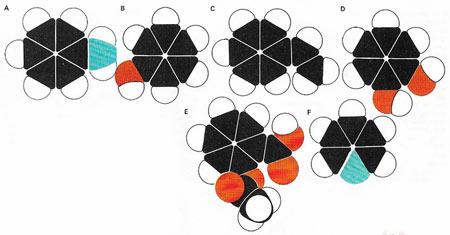 Fig 3. In benzene other atomic groups can replace hydrogen atoms. In aniline (A) one hydrogen is replaced by an amino (–NH2) group, while phenol (B) has a hydroxyl (–OH) group in place of one hydrogen. Styrene (C), from which polystyrene is made, has a small carbon chain attached to the benzene ring. More than one hydrogen can be replaced: catechol (D), for example, has two –OH groups, while aspirin (E) has two different groups attached to the ring. The shared orbital structure of benzene is sometimes retained even when carbon atoms are replaced, as in pyridine (F).

Benzene is a common organic chemical compound made up of six carbon atoms arranged in a hexagonal ring, with hydrogen atoms attached to each corner (see Fig 1 and 2). It is a clear, colorless, sweet-smelling, toxic liquid hydrocarbon with the chemical formula C6H6. Benzene is the archetypical aromatic compound. Although it consists of unsaturated molecules, benzene is stable and not very reactive. However, it does take part in many substitution reactions in which hydrogen atoms are replaced by other atoms or groups. It doesn't readily undergo addition reactions but does form various addition products with halogens – including γ-benzene hexachloride, a powerful insecticide.

Benzene is present in small proportion in some crude oils and is made commercially from petroleum by the catalytic reforming of naphthenes in petroleum naphtha. It is also made from coal in the manufacture of coke. Benzene is used as a solvent in the manufacture of detergents, synthetic fibers, petrochemicals, and as a component of high-octane gasoline. It is also used as the starting material for a great variety of aromatic compounds, including phenol, styrene, aniline, and maleic anhydride (see Figure 3). It is toxic by ingestion and inhalation, and may cause bone marrow problems or leukemia with prolonged exposure.

Benzene was first isolated by Michael Faraday in 1825, from the whale oil used in gaslights; he also determined that it had an empirical formula of CH. Eilhardt Mitscherlich synthesized benzene in 1834, and showed it to have a molecular formula of C6H6.

Many other compounds with similar properties to benzene were discovered in the 1800s, all having a low ratio of hydrogen to carbon. This usually indicates the presence of carbon-carbon double bonds, but these compounds did not undergo the reactions typical of alkenes under ordinary lab conditions. Since many of these molecules had pleasant aromas, they were called "aromatic compounds." The structure of benzene and its derivatives was a puzzle for many years, until Friedrich August Kekulé proposed the cyclic structure in the top diagram in 1866 (supposedly after having a dream about a snake biting its own tail). The term "aromatic" in organic chemistry now means that the molecule contains benzene, or its structural relatives.

Benzaldehyde (C6H5CHO), also called benzene carbaldehyde, is a colorless liquid with a smell of almonds. It is the simplest an aromatic aldehyde. Benzaldehyde is found in bitter almonds but synthesized from toluene, and is used as a flavoring, in chemical synthesis, and in making perfumes and certain aniline dyes. It is oxidized to benzoic acid. Melting point -26°C (-14.8°F), boiling point 178.1°C (352.6°F), relative density 1.04.

Benzoic acid (C6H5COOH) is an aromatic carboxylic acid that takes the form of a white crystalline solid. Benzoic acid occurs naturally in many plants, and is made by oxidation of toluene. It is mainly used as a food preservative. Relative density 1.266 (at 15°C), melting point 122.4°C 252.3°F), boiling point 249°C (480.2°). Compounds containing the benzoyl group (C6H5CO-) were studied by Justus von Liebig and Friedrich Wöhler. See accompanying video.

Benzyl alcohol, also called phenyl carbinol, (C 6H5CH2OH), is a colorless liquid and aromatic alcohol whose esters are found in flowers and used in perfumes. It is used in color-film developing and in dyeing. Melting point -15°C, boiling point 205°C.

Benzyne is an unstable organic compound derived from benzene. Benzyne molecules consist of a hexagonal ring of carbon atoms joined by two double bonds and one triple bond. It probably exists only briefly in variation reactions of aromatic compounds.

Styrene, also known as vinylbenzene, is a colorless, oily, toxic, liquid hydrocarbon, important as a monomer (building block) of polystyrene. It is also a monomer of styrene-butadiene rubber (SBR), the artificial rubber most commonly used in pneumatic tires. Styrene, a derivative of benzene, is found in coal tar and essential oils.

TNT (trinitrotoluene) is a pale yellow crystalline solid by nitration of toluene. It is the most extensively used high explosive, being relatively insensitive to shock, especially when melted by steam heating and cast. Molecular weight (TNT) 227.1, melting point 82°C.