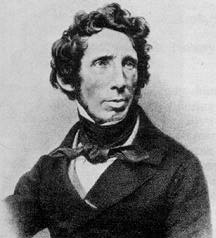 Friedrich Wöhler was a German chemist and student of Berzelius who, in 1828, synthesized urea by evaporating a solution of ammonium isocyanate and thereby demonstrated that there is no sharp distinction between organic and inorganic matter. Although this did not put an end to belief in vitalism, it showed that some organic substances, at least, could be produced independently of living organisms.

Together with Justus Liebig he discovered the benzoyl radical.

In 1858, Wöhler became one of the first scientists to identify organic matter in meteorites (the first of all having been Berzelius in 1834). The fact that he (erroneously) concluded without hesitation that the organics were biological in origin reflects the strength of preconceived notions about extraterrestrial life at this time.