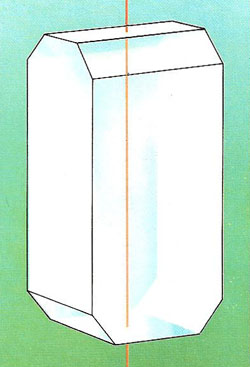 The urea crystal has a vertical "improper axis of symmetry" for a symmetry element. This means that rotating the crystal through 90 degrees and then reflecting it in a bisecting horizontal plane leaves it apparently unchanged. It also has two mirror planes and two 2-fold axes.

Urea, also called carbamide, is a white or clear crystalline solid, CO(NH2)2, soluble in water, which is a major excretion product of protein metabolism in mammals. In it, two amine (-NH2) groups are connected by a carbonyl (C=O) group. It is found in urine and other body fluids.

Urea was the first organic substance to be synthesized in the laboratory (Wöhler, 1828), by evaporating a solution of ammonium cyanate. It can be made by the addition of water to cyanamide (H2NCN), by passing water into fused phenylcyanamide, and by numerous other methods. Commercially it is made by reacting carbon dioxide with ammonia at 200°C and pressures up to 400 atm, the ammonium carbarnate (NH4NH2CO2) formed intially largely dehydrating to urea. Synthetic urea is used as a fertilizer, in animal feed, and in resins.

The urea cycle is the cyclic sequence of reactions occurring in the liver, which results in the excetion of excess nitrogen as urea. Carbamoyl phosphate is first formed from carbon dioxide, ammonia, and ATP. This is also the first step in the biosynthesis of pyramidines. Carbamoyl phosphate then condenses with the amino acid ornithine to yield citrulline which is converted to arginine via arginosuccinate. The enzyme arginase then cleaves arginine to give back ornithine, which can condense again with another molecule of carbamoyl phosphate, and also gives a molecule of urea which is excreted in the urea.