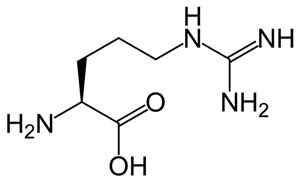 Arginine is one of the ten essential amino acids; it plays an important role in the formation of urea in the liver.

Arginine is a colorless, crystalline compound, with a melting point of 207°C, which occurs in decomposing animal and vegetable proteins, and in the muscles of invertebrates. It is one of the most widely distributed products of protein hydrolysis and is obtained in particularly high concentrations from proteins belonging to the protamine and histone classes.

Arginine has the chemical formula: H2NC(NH)NH(CH2)3CH(NH2)COOH.