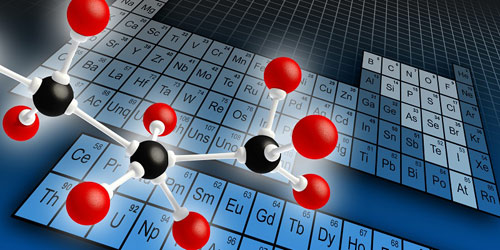 Ultimately, chemistry deals with the interactions between atoms and molecules. One of the most fundamental concepts in chemistry is the periodic table, here shown in the background against a ball-and-stick model of a molecule.

Chemistry is the science of the nature, composition, and properties of material substances, and their transformations and interconversions. In modern terms, chemistry deals with elements and compounds, with the atoms and molecules of which they are composed, and with the reactions between them. It is thus basic to natural phenomena and modern technology alike.

Chemistry may be divided into five major parts: organic chemistry, the study of carbon compounds; inorganic chemistry, dealing with all the elements except carbon, and their compounds; chemical analysis, the determination of what a sample contains and how much of each constituent is present; biochemistry, the study of the complex organic compounds in biological systems; and physical chemistry, which underlies all the other branches, encompassing the study of the physical properties of substances and the theoretical tools for investigating them. Related sciences include geochemistry and metallurgy.

Practical chemistry originated with the art of the metallurgists and artisans of the ancient Middle East. Their products included not only refined and alloyed metals but also dyes and glasses, and their methods were and remain shrouded in professional secrecy. Their chemical theory, expressed in terms of the prevailing theology, involved notions such as the opposition of contraries and the mediation of a mediating third. Classical Greek science generally expressed itself in he theoretical rather than the practical, as the conflicting physical theories of Thales, Anaxagoras, Anaximenes, and Aristotle bear witness. An important concept, that matter exists as atoms – tiny individual material particles – emerged at about this time (see atomism) though it did not become dominant for another 2,000 years.

During the Hellenistic Age a new practical chemistry arose in the study of alchemy. These early alchemists sought to apply Aristotelian physical theory to their practical experiments. Alchemy was the dominant guise of chemical science throughout the medieval period. Like the other sciences, it passed through Arab hands after the collapse of the Roman world, though, unlike the case with some other sciences, great practical advances were made during this time with the discovery of alcohol distillation and methods for preparing nitric acid and sulfuric acid. Chemical theory, however, remained primitive and practitioners sought to guard their secret recipes by employing obscure and even mystical phraseology.

The 16th century saw new clarity brought to the description of metallurgical processes in the writings of Georgius Agricola and the founding by Paracelsus of the new practical science of iatrochemistry with its emphasis on chemical medicines. Jan Baptista van Helmont, the greatest of his successors , began to use quantitative experiments. In the 17th century mechanist atomism enjoyed a revival with Robert Boyle leading a campaign to banish obscurantism from chemical description. The 18th century saw the rise of the phlogiston theory of combustion, promoted by Georg Stahl and adopted by all the great chemists of the day: Joseph Black, Carl Wihelm Scheele, and Joseph Priestley (all of whom found their greatest success in the study of gases). The phlogiston theory fell before the oxygen theory of Antoine Lavoisier and his associated binomial nomenclature , and the nineteenth century saw the proposal of John Dalton's atomic theory, Avogadro's hypothesis (neglected for 50 years until revived by Stanislao Cannizzaro), and the foundation of electrochemistry which in the hands of Humphry Davy, rapidly yielded two new elements, sodium and potassium.

During the 19th century chemistry gradually assumed its present form, the most notable innovations being the periodic table of Dmitri Mendeleyev, the benzene ring-structure of Kekulé, the systematic chemical thermodynamics of Josiah Gibbs, and Robert Bunsen's chemical spectroscopy.

In the opening years of the 20th century the new atomic theory revolutionized chemical theory and the interrelation of the elements was deciphered. Since then successive improvements in experimental techniques (e.g., chromatography; isotopic labeling; microchemistry) and the introduction of new instruments (infrared, nuclear magnetic resonance, and mass spectroscopes) have led to continuing advances in chemical theory. These developments have also had a considerable impact on industrial chemistry and biochemistry. One of the most significant changes in the chemist's outlook has been that his interest has moved away from the nature of chemical substance itself toward questions of molecular structure, the energetics of chemical processes, and reaction mechanism.

Biochemistry is the study of the substances occurring in living organisms and the reactions in which they are involved. Biochemistry is a science on the border between biology and organic chemistry. The main constituents of living matter are water, carbohydrates, lipids, and proteins. The total chemical activity of the organism is known as its metabolism. Plants use sunlight as an energy source to produce carbohydrates from carbon dioxide and water by photosynthesis. The carbohydrates are them stored as starch, and are used for structural purposes, as in the cellulose of plant cell walls, or oxidized through a series of chemical reactions including the citric acid cycle, the energy released being stored as ATP (adenosine triphosphate). In animals energy is stored mainly as lipids, which as well as forming fat deposits are components of all cell membranes.

Proteins have many functions, of which metabolic regulation is perhaps the most important. Enzymes, which control almost all biochemical reactions, and some hormones are possible. Plants synthesize proteins using simpler nitrogenous compounds from the soil. Animals obtain proteins from food and break them down by hydrolysis to amino acids. New proteins are made according to the pattern determined by the sequence of nucleic acids in the genes.

Many reactions occur in all cells and may be studied in simple systems. Methods used by biochemists and chemists are similar and include labeling with radioactive isotopes and separation techniques such as chromatography, used to analyze very small amounts of substances, and the high-speed centrifuge. Molecular strictures may be determined by X-ray diffraction.

Landmarks in biochemistry include the synthesis of urea by Wöhler (1828), the pioneering research of von Liebig, Pasteur, and Bernard, and more recently the elucidation of DNA by James Watson and Francis Crick (1953).

Organic chemistry is a major branch of chemistry comprising the study of carbon compounds containing hydrogen (simple carbon compounds such as carbon dioxide being usually deemed inorganic). This apparently specialized field is in fact wide and varied, because of carbon's almost unique ability to form linked chains of atoms to any length and complexity; far more organic compounds are known than inorganic.

Organic compounds form the basic stuff of living tissue and until the mid-19th century, when organic syntheses were achieved, a "vital force" was thought necessary to make them. The 19th-century development of quantitative analysis by Justus Liebig and Jean Baptiste Dumas, and of structural theory by Stanislao Cannizzaro and Friedrich Kekulé, laid the basis for modern organic chemistry. Organic compounds are classified as aliphatic, alicyclic, aromatic, and heterocyclic compounds, according to the structure of the skeleton of the molecule, and are further subdivided in terms of the functional groups present.

Radiochemistry is the use of radioisotopes in chemistry, especially in studies involving chemical analysis, where radioisotopes provide a powerful and sensitive tool. Tracer techniques, in which a particular atom in a molecule is "labeled" by replacement with a radioisotope, are used to study reaction rates and mechanisms.