Fig 1. Enzymes make molecules split up or join together much faster than they would otherwise. To work effectively, a good physical fit is needed between the enzyme and the other molecule(s) – the substrate(s). Only a part of the enzyme, the active site, often containing a coenzyme, comes into contact with other molecules. The rest of the molecule is needed to give the enzyme the correct shape. 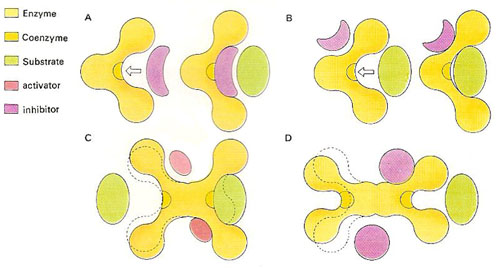 Enzymes are biochemical catalysts, the majority of which are globular proteins although some, known as ribozymes, are composed of RNA. About 1,000 different varieties are found in the human body.

Enzymes facilitate key processes in the biochemistry of organisms which, otherwise, would take place too slowly for the maintenance of life. Enzymes speed up chemical reactions of substrates by lowering the activation energy. They have complex tertiary structures (see protein structure) which are held in shape by weak chemical bonds between the polypeptide chains.

Each enzyme has a specific surface configuration with one or more clefts known as active sites to which only certain substrates can bind. Each enzyme is highly specific to the reaction it catalyzes as the substrate must fit precisely into the active site. If the active site loses its unique shape, it can no longer provide a point of attachment for its substrate and the enzyme is said to be denatured. This can happen if the enzyme is subjected to temperatures or pH levels outside of the narrow range in which it normally operates. Many enzymes require the assistance of certain accessory substances, known as cofactors and coenzymes, to function properly (see Figure 1).

A coenzyme is an organic non-protein that plays an essential part in some reactions catalyzed by enzymes. Coenzymes often serve as a temporary carrier of an intermediate product of the reaction. They usually participate in the substrate-enzyme interaction by donating or accepting certain chemical groups. A coenzyme always regains its original structure even though it may have been altered during a reaction. Many vitamins are precursors of coenzymes.

A cofactor is one or more non-protein components required by an enzyme in order to carry out its normal catalytic function. Some cofactors are metal ions, such as ions of iron, zinc, or copper, or simple organic molecules. When the cofactor consists of a complex molecule, it is known as a prosthetic group. An example is heme in hemoglobin. Prosthetic groups are always tightly bound to their parent enzyme. Cofactors that are not tightly bound, yet are essential to the enzyme's normal activity, are referred to as coenzymes.

A restriction enzyme is an enzyme that recognizes a specific sequence of double-stranded DNA and cuts the DNA at that site. Restriction enzymes, also called restriction endonucleases, are often referred to as molecular scissors and are a vital tool in genetic engineering. Over 3,000 restriction enzymes have been studied in detail. Some occur naturally in bacteria and archaea and are thought have evolved as a defense against invading viruses; others are made artificially.


Shape and activity of enzymes

By changing the shapes of enzymes it is possible to inactivate them, and thus stop certain reactions from occurring at a noticeable rate (see Figure 2). For example, the important protein-digesting enzyme chymotrypsin occurs in an inactive form called chymotrypsinogen. Only when a few amino acids that make up this protein are removed does it adopt the catalytic shape of chymotrypsin. This change is triggered by the presence of food in the digestive tract. If the chymotrypsin were active all the time it would rapidly digest the intestinal wall while waiting for food to arrive.

In many biochemical processes a molecule is passed from enzyme to enzyme before it becomes an end product. At each stage, an intermediate compound is formed. Sometimes the final product, or one of the intermediates, can combine with an enzyme farther back along the chain and switch it off. This feedback is like automation in a factory that ceases production when enough of a particular material has been made. Other small molecules may combine with an enzyme molecule to increase its activity.

The "lock and key" model of enzymes, first described more than a century ago by Emil Fischer, comes surprisingly close to the actual mechanism of enzyme-substrate interaction. In the more recent and refined model, known as induced fit, an enzyme assumes a complementary shape to that of its substrate only after the substrate binds to the enzyme; hence, this is a more dynamic scenario compared to the lock-and-key hypothesis.