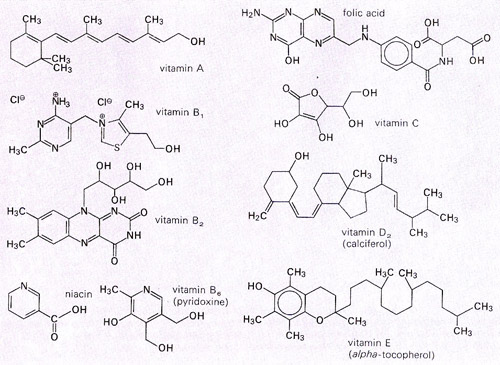 The structure of some vitamins. Closely related compounds often have similar metabolic effects, thus vitamin B6 exists in aldehyde and amine forms as well as the alcohol shown here.

A vitamin is an organic molecule needed in trace amounts for normal growth and metabolic processes. Vitamins often act as part of an enzyme system (hence the small amounts required), and in doing so, are broken down and lost. What distinguishes a vitamin from most other compounds essential in metabolism is that the organism can't replace it by synthesizing it, and so it must get it from outside. Occasionally an animal may be able to synthesize part of its requirement (e.g. vitamin D in humans), and often symbiotic organisms provide part or all of the requirement (e.g. B vitamins synthesized by gut bacteria of insects and vertebrates).

Vitamins are denoted by letters and are often divided into fat-soluble (A, D, E, and K) and water-soluble (B and C).

Vitamins are needed only by heterotrophic organisms; autotrophs, such as most green plants, are by definition independent of an external supply of organic compounds. What is a vitamin for one heterotroph may be synthesized in adequate amounts by, and is therefore not a vitamin for, another; or it may take no part at all in the metabolism of another. There is no such thing as a vitamin in general, but only for specified organisms. Some (like those of the vitamin B complex) which are perhaps universal constituents of existing organisms are however required by a very wide range of organism; others (like C) by very few. Every vitamin necessary for a given organism is synthesized by other organisms, otherwise a continuous supply wouldn't be available.

Sometimes several different compounds can substitute for each other in satisfying a given requirement; either because the organism requires, not a specific molecule, but a specific chemical grouping which is present in, and available from, each of the alternative compounds; or because conversion of a few closely related groupings into the one required is possible within the organism. Deficiency of the vitamin reduces the rate of the metabolic process in which it is concerned, with widespread effects (symptoms of deficiency disease). A general effect of deficiency of most vitamins, which was important in the early history of their discovery, is that growth of young animals is stunted.


Function of specific vitamins and effect of deficiency

Vitamin A, or retinol, is essential for the integrity of epithelium and its deficiency causes skin, eye, and mucous membrane lesions; it is also the precursor for rhodopsin, the retinal pigment. Vitamin A excess can cause an acute encephalopathy or chronic multisystem disease.

Important members of the vitamin B group include thiamine (B1), riboflavin (B2), niacin, pyridoxine (B6), folic acid, and cyanobalamin B12). Thiamine acts as a coenzyme in carbohydrate metabolism and its deficiency, seen in rice-eating populations and alcohols, causes beriberi and a characteristic encephalopathy. Riboflavin is also a coenzyme, active in oxidation reactions; its deficiency causes epithelial lesions. Niacin is a general term for nicotinic acid and nicotinamide, which are coenzymes in carbohydrate metabolism; their deficiency occurs in millet- and corn-dependent populations and leads to pellagra. Pyridoxine provides an enzyme important in energy storage and its deficiency and its deficiency may cause nonspecific disease or anemia. Folic acid is an essential cofactor in nucleic acid metabolism and its deficiency, which is not uncommon in pregnancy and with certain drugs, causes a characteristic anemia. Cyanocobalamin is essential for all cells, but the development of blood cells and gastrointestinal tract epithelium and nervous system function are particularly affected by its deficiency, which occurs in pernicious anemia and in extreme vegetarians. Pantothenic acid, biotin, choline, inositol, and para-aminobenzoic acid are other members of the B group.

Vitamin C, or ascorbic acid, is involved in many metabolic pathways and has an important role in healing, blood cell formation, and bone and tissue growth; scurvy is its deficiency disease.

Vitamin D, or calciferol, is a crucial factor in calcium metabolism, including the growth and structural maintenance of bone; lack causes rickets, while overdosage also causes disease.

Vitamin E, or tocopherol, appears to play a role in blood cell and nervous system tissues, but its deficiency is uncommon and its beneficial properties have probably been overstated.

Vitamin K provides essential cofactors for production of certain clotting factors in the liver; it is used to treat some clotting disorders, include that seen in some premature infants.

Dietary sources of vitamin are shown in the illustration to the right. Vitamins essential to health are found in great quantity in liver, milk, green vegetables, legumes, and corn. Fatty foods provide the chief source of vitamins K, D, A, and E, which are soluble in fats and oils. Vitamin K is produced by micro-organisms in the gut, while any ordinary diet contains adequate vitamin E. Some vitamin D is produced in the skin on exposure to sunlight but this is insufficient except in sunny climates. Though they are essential nutrients, vitamins A and D are poisonous in large doses. Vitamin B is generally found in meat and bran cereals. Vitamin C, found in fresh vegetables and fruit, is easily lost in cooking and storage.

Carl Dam was a Dutch biologist who, in 1934, discovered vitamin K, the fat-soluble vitamin needed for blood clotting. He isolated it from hempseed and the seeds of other plants, and he also discovered in liver. For this work, he received the 1943 Nobel Prize in Physiology or Medicine, which he shared with Edward Doisy. In addition, he examined the roles other vitamins and lipids.

Christiaan Eijkmann was a Dutch pathologist. Following a trip to Indonesia (1886) to investigate beriberi he was able to show that the disease resulted from a dietary deficiency. This led to the discovery of vitamins. For his work he was awarded (with F. G. Hopkins) the 1929 Nobel Prize for Physiology or Medicine.

Casimir Funk was a US biochemist who discovered vitamins. In 1912 he found vitamins B1, B2, C, and D, coined the term "vitamine" (literally "the amines of life") and presented a paper formulating the idea of vitamin deficiency disorders. Funk also contributed to the knowledge of cancer and of the hormones of the sex glands.