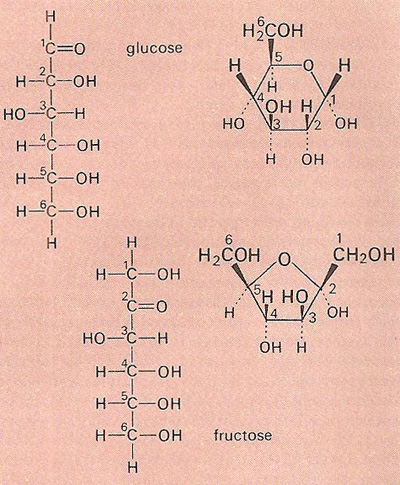 Fig 1. Monosaccharides glucose (a hexose) a fructose (a pentose), shown in both open-chain (left) and hemiacetal-ring (right) forms. 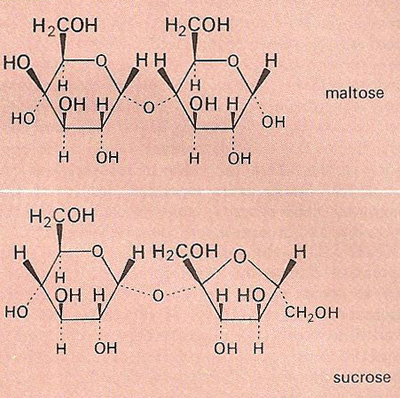 Fig 2. The disaccharides maltose and sucrose.

A carbohydrate is an organic compound consisting of a chain or ring of carbon atoms to which hydrogen and oxygen atoms are attached in the ratio of approximately 2:1. The general formula of carbohydrates is Cx(H2O)y. Carbohydrates form a large and important group of naturally occurring compounds, which can be divided into a number of smaller families.

A major division of carbohydrates is between sugars and polysaccharides. Sugars are sweet to the taste, are soluble in water, and have fairly simple chemical formulae. They are classified as monosaccharides or disaccharides.

Polysaccharides are generally not sweet, are insoluble in water, and contain more than 18 carbon atoms in each molecule. The three principal polysaccharides – starch, glycogen, and cellulose, which play an essential role in the metabolism of all terrestrial organisms and, in the case of cellulose, the structure of plants – contain many more than this minimum number of carbon atoms.

Monosaccharides, also known as simple sugars, have the general formula (CH2O)n. They are classified by the number of carbon atoms in each of their molecules: trioses (3), tetroses (4), pentoses (5), hexoses (6), and so on (up to 9). The most abundant natural monosaccharides are the hexoses, C6H12O6 (including glucose), and the pentoses (including xylose). Many different isomers of these sugars are possible and often have names reflecting their source, or property, e.g., fructose is formed in fruit, arabinose in gum arabic, and the pentose, xylose, in wool (Fig 1).

Monosaccharides are sweet-tasting, cannot be broken down by hydrolysis, and combine to form disaccharides and polysaccharides.

A pentose is a monosaccharide containing five carbon atoms in the molecule. Examples include is ribose and deoxyribose, which are important constituents of the nucleic acids RNA and DNA, respectively. Pentoses also make up various plant polysaccharides, such as pectin and gum arabic.

A hexose is a monosaccharide containing six carbon atoms in the molecule (C6H12O6). The hexoses are by far the most abundant simple sugars and those most frequently found in food. Examples include glucose, fructose, and galactose.

Almost all naturally-occurring polysaccharides are made up of hexose units.

A polysaccharide is any of a group of polymers made from monosaccharides linked by glycosidic bonds. Polysaccharides are insoluble and may serve as a store of energy, as in the case of starch and glycogen, or as a structural component, as in the case of cellulose which is found in the cell walls of plants. A single cellulose chain may contain as many as 10,000 units of glucose.

None of these compounds is truly soluble in water although starch and glycogen give colloidal solutions (the particles are too large to form a true solution). They are not sweet to the taste, though after some starch grains have been chewed for a short time the enzyme ptyalin in the saliva hydrolyses the starch to give maltose, a sugar which is sweet.

A distinction is sometimes made between polysaccharides and oligosaccharides. The latter, which are uncommon in nature, consist of between 3 and 6 (or up to 10, depending on the definition) monosaccharide molecules linked together.

Dextrin is a low-molecular-weight polysaccharide (carbohydrate) that is formed as an intermediate product in the digestion of starch by the enzyme amylase. It is also obtained from starch by heating or partial hydrolysis with acids, diastase, or the bacterium Bacillus macerans. Soluble in water, dextrin is used in the preparation of pharmaceutical products (as an excipient), in surgical dressings, as an adhesive, and as a size for paper and textiles.

In 2000, molecules of the simple sugar glycoaldehyde, comprised of 2 carbon, 2 oxygen, and 4 hydrogen atoms, were detected in a star-forming region near the center of our galaxy. This is biologically significant because glycoaldehyde is a component that can react to form more complex sugars such as ribose – a building block of nucleic acids such as RNA and DNA.