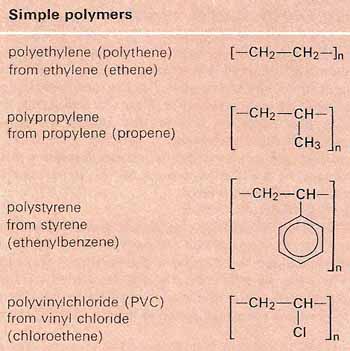 A polymer is a substance composed of macromolecules (very large molecules) built up by repeated linking of many similar or identical molecular subunits, known as monomers. Many natural polymers exist, including proteins (built up from amino acids monomers), nucleic acids, carbohydrates (e.g., starch is a polymer of glucose), resins, rubber, and many minerals (e.g., quartz). The ability to make synthetic polymers to order lies at the heart of modern technology (see plastic).

Polymerization, which requires that each monomer has two or more functional groups capable of linkage, takes place by two processes: condensation with elimination of small molecules, or simple addition. Catalysis is usually required, or the use of an initiator to start a chain reaction of free radicals.

Polymers made up of a single type of monomer are called homopolymers. If more than one kind of monomer is used, the result is a copolymer or heteropolymer. In the case of copolymers the different monomer units may alternate, following some other repeating (periodic) or statistical sequence, or be arranged at random. A typical example is the condensation of 1,6-diaminohexane (hexamethylenediamine) with hexanedioic acid (adipic acid) to form nylon 6,6. The properties of a polymeric plastic can most easily be modified if it is a copolymer of two or more different monomers, e.g., acrylonitrile-butadiene-styrene copolymer (ABS). Varying the proportions of the component monomers can preselect its properties.

Under special conditions it is possible to form stereoregular polymers, with the groups regularly oriented in space; these have useful properties. Linear polymers may form crystals in which the chains are folded sinuously, or they may form an amorphous tangle. Stretching may orient and extend the chains, giving increased tensile strength useful in synthetic fibers. Some cross-linking between the chains produces elasticity; a high-degree of cross-linking yields a hard, infusible product (a thermosetting plastic).