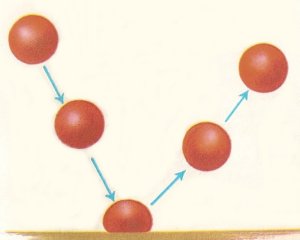 A rubber ball is badly deformed upon impact with the ground but always regains its original form. 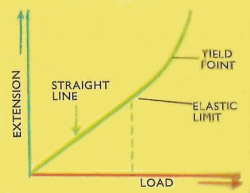 Graph showing the extension of a wire plotted against increasing load. At first the wire extends steadily, hence the straight line, but after the elastic limit has been reached a sharp upward trend on the graph shows how the extension of the wire increases rapidly until the yield point is reached.

Elasticity is the property of certain materials that enables them to return to their original size and shape after an applied stress has been removed. A solid rubber ball, for example, can be squeezed, stretched, bent, or twisted yet it will still revert to its original shape when the pressure or stress is removed.

Rubber is the first material that comes to mind when the word elasticity is mentioned. However, all solids possess this property to a certain degree, though it most cases it is barely noticeable. The only metal in which elasticity is very well developed is steel and even then it must be hardened steel. This is produced by rapidly cooling or quenching red-hot steel in cold water, a process called tempering. Tempered steels are hard and brittle but very elastic. Springs are nearly always made of tempered steel which has been gently reheated, a process that destroys some of the elasticity but makes the steel softer and tougher.

When engineers are planning a bridge they need to know the tensile strength of the steel being used in its construction (i.e. the behavior of the metal under forces which tend to stretch it). Similarly, the tensile strength of rubber is of great importance to manufacturers of tires and similar articles. The way in which this is determined involves adding weights to one end of a wire or strand of a substance to be tested, the other end being fixed. At first, the wire or strand increases its length by equal amounts if equal weights are added. For instance, if 10 newton (N) weight stretches a steel wire half a millimeter, a 20 N weight will stretch it one millimeter, and so on. And when the weights are removed the wire or strand returns to its original length. The fact that the extension of the wire is proportional to the force applied was discovered as early as 1650 by Robert Hooke and is now known as Hooke's law. But this process does not go on indefinitely.

There comes a point at which the wire or strand begins to stretch much further than Hooke's law would predict for the extra weights added. Moreover, when the weights are removed it no longer reverts to its original length. The point at which this happens is called the elastic limit. The amount of extension increases rapidly after the elastic limit has been reached until the wire suddenly parts at the yield point.

The elastic properties of materials are due to forces acting between atoms or molecules. The reason why rubber can be stretched so much is that it is built up of long molecular chains, most of which are folded like tangled ropes. When the material is stretched the chains simply straighten themselves out and when the force is removed they revert to their original tangled state. Many other materials, such as wood and silk, are built of chain molecules, but in most cases strong links between the chains prevent them from curling back upon themselves, so that elasticity is not pronounced.