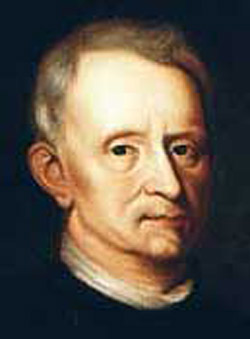 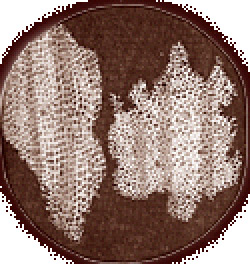 Illustration of cells from Micrographia.

Robert Hooke was an extraordinarily prolific English experimental scientist, mathematician, and inventor. Considered the greatest mechanic of his age, he made many improvements in astronomical instruments and clocks, was the first to formulate the theory of planetary movements as a mechanical problem, explored the behavior of elastic materials, and coin the term "cell" in biology. He devised a practicable system of telegraphy, invented the spiral spring in watches, and constructed an early arithmetical machine. He also built the first Gregorian telescope, observed that Jupiter revolves on its axis, and made drawings of Mars from which its period of rotation was later found.

In 1672 Hooke attempted to prove that the Earth moves in an ellipse round the Sun and six years later proposed an inverse square law of gravitation to explain planetary motions. Hooke wrote to Newton in 1679 asking for his opinion:

...of compounding the celestiall motions of the planetts of a direct motion by the tangent (inertial motion) and an attractive motion towards the centrall body ... my supposition is that the Attraction always is in a duplicate proportion to the Distance from the Center Reciprocall...

Hooke seemed unable to give a mathematical proof of his conjectures. However, he claimed priority over the inverse square law and this led to a bitter dispute with Newton who, as a consequence, removed all references to Hooke from the Principia.

In the seventeenth century the wealth of scientific knowledge was not great and it was common for an individual to make useful contributions to fields as widely separated as astronomy and medicine. Robert Hooke was no exception, save perhaps in the extreme diversity of his interests. An entry in his diary reads: "Spent most of my time in considering all matters".

Hooke was born at Freshwater, on the Isle of Wight, off the south coast of England. Although he had no schooling until he was 13, he became one of the most important scientists of his time. After studying under Busby at Westminster School he went up to Christ Church College, Oxford, where he became acquainted with the likes of Christopher Wren and Robert Boyle. Hooke's aptitude for mechanical devices and experimental work soon became obvious and he became an assistant to Boyle. The latter was experimenting with air but was handicapped by lack of a suitable pump for compressing it or for evacuating vessels. Hoyle constructed such a pump and also designed experiments around it.

In 1662 Hooke's outstanding ability was rewarded with the post of Curator of Experiments in the newly-formed Royal Society. He was required to provide new experiments and instruments for the weekly meetings of the Society. He was also, from 1665, a lecturer in mechanics and professor of geometry at Gresham College in London. In 1677 he became secretary of the Royal Society. After the Great Fire of London in 1666, he acted as surveyor during the works, and thus accumulated several thousand pounds, which he hid away in an old iron chest.

In 1665 Hooke published a book – the Micrographia – in which he described his work for the Royal Society. A good deal of the book deals with microscopic observations, for Hooke spent a lot of time on designing and improving microscopes. His observations were beautifully illustrated with his own drawings. He was probably the first person to see and describe the cellular structure of plants and certainly the first to use the term "cell".

Hooke strongly attacked the view that fossils were created in rocks by some unknown agency. He maintained that they were shells or skeletons that had someone been "thrown to that place." Unable to recognize many of the fossils, he concluded that there had been different types of animals in the past and that present-day species had not always existed. In other words he believed in what we now call evolution.

Although Hooke's work in optics was rather overshadowed by that of Newton, he nevertheless made important contributions to the theory of light and the phenomenon of diffraction. His law of the extension and compression of elastic bodies (1676), 'ut tensio sic', is now known as Hooke's law.

Hooke and Boyle worked together on problems concerning the air and combustion and Hooke put forward a theory in his Micrographica. He suggested that during combustion, something in the air combined with the burning material. This of course was quite right but it was many years before it was accepted. For much of the following century people accepted the "phlogiston theory" holding that separate "fire atoms" were contained in combustible materials.

During the 1670s, Hooke devised a number of mechanical objects, many of which essential to present-day machines. Examples include a universal joint, the iris diaphragm used in cameras, and a many clock mechanisms (e.g. the balance spring).

Most of Hooke's observations were recorded in papers presented to the Royal Society. He presented so much new material that he never had time to follow it up and it was left to others to take up these ideas and develop them. This is one reason that Hooke's name is not widely known. Another is that his ideas on many subjects were ahead of his time and could not be proved. The mutual bad feeling between Hooke and Newton was unfortunate, too. When Newton became president of the Royal Society, he did nothing to foster Hooke's work. Hooke's reputation lived on for a few years after his death in 1703 but then he was almost forgotten for more than a hundred years.