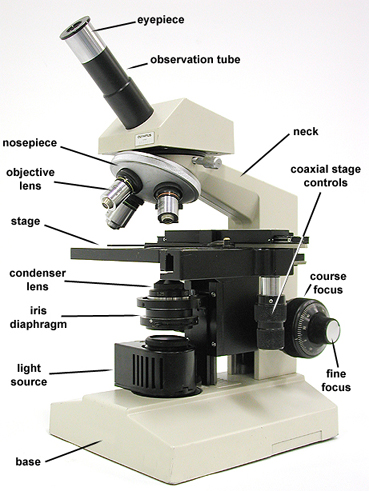 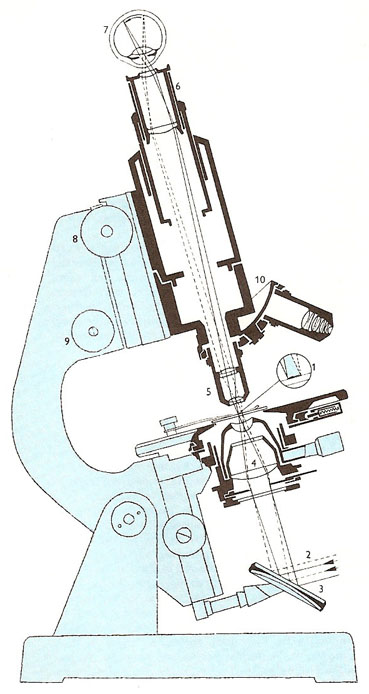 Section through a compound optical microscope. The specimen is placed on the stage (1) and illuminated with light (2) reflected from a mirror (3) and refracted through a condenser lend (4). The object lens (5) is positioned over the specimen, the eyepiece lens (6) combining with the lens of the observer's eye to focus an upright magnified image of the specimen onto the observer's retina (7). The eyepiece lens can be moved using first coarse (8) and then fine (9) screws for accurate focusing, while the magnification can be changed by turning a turret mounting (10) which carries a variety of object lenses.

A microscope is an instrument for producing a magnified image of a small object. There are many types of microscopes ranging from simple, single-lens instruments (magnifying glasses) to compound microscopes and high-powered electron microscopes.

The simple microscope, or magnifying glass, comprising a single converging lens, was known in ancient times, but the first compound microscope is thought to have been invented by the Dutch spectacle-maker Zacharias Janssen around 1590. However, because of the aberration unavoidable in early lens systems, the simple, single-lens microscope held its own for many years, Anton van Leeuwenhoek (1632–1723) constructed many fine examples using tiny, near-spherical lenses. His single-lens microscopes were capable of magnifying up to 300 times. With them he discovered microorganisms, thereby founding the science of microbiology and providing the basis for the germ theory of disease. Probably the greatest of the early microscopists, however, was the Italian Marcello Malpighi (1628–1694), who is generally regarded as the founder of histology. Compound microscopes incorporating achromatic lenses became available from the 1840s.

In the compound microscope – the most widely used kind of microscope – has two lens systems, the objective and the eyepiece (or ocular), which are mounted at opposite ends of a tube called the body tube. There is also a stage to hold the specimen, a light source, and an optical condenser. A magnified inverted image of an object resting on the stage is produced by the objective lens system. This image is viewed through the eyepiece which acts as a simple microscope, giving a greatly magnified virtual image.

In most biological microscopy the object is viewed by transmitted light, illumination being controlled by mirror, diaphragm, and "substage condenser" lenses. Near-transparent specimens are often stained to make them visible. As this usually proves fatal to the specimen, phase-contrast microscopy, in which a "phase-plate" is used to produce a diffraction effect, can alternatively be employed. Objects which are just too small to be seen directly can be made visible in dark-field illumination. In this an opaque disk prevents direct illumination and the object is viewed in the light diffracted from the remaining oblique illumination. In mineralogical use objects are frequently viewed by reflected light.

Although there is no limit to the theoretical magnifying power of the optical microscope, magnifications greater than about 2,000 times can offer no improvements in resolving power for light of visible wavelengths. The shorter wavelength of ultraviolet light allows better resolution and hence higher useful magnification. For yet finer resolution scientists to to electron beams and electromagnetic focusing.

Transmission electron microscopes (TEMs) are similar to light microscopes, except that they use a beam of electrons instead of light, and electromagnetic "lenses" instead of glass ones. Furthermore, because electrons are invisible, the image must be formed on a fluorescent screen or photographic film. Electron microscopes allow much higher magnifications than light microscopes. Modern TEMs can magnify up to about five million times, enabling viruses and large molecules (such as DNA) to be seen.

The scanning electron microscope (SEM) works in a different way from the TEM. SEMs have a lower maximum magnification (approximately 100,000 times) than do TEMs. However, unlike TEMs, SEMs provide three-dimensional images. This makes SEMs particularly valuable for applications such as studying the surface structure of cells and tissues.

Phase-contrast and interference microscopes are types of light microscopes with modified illumination and optical systems that make it possible for unstained transparent specimens to be seen clearly. These microscopes are particularly useful for examining living cells and tissues.

An ultramicroscope is a microscope for studying liquid suspensions of particles too small for direct microscopy (10nm–1 μm), using light scattered by the particles at right angles. It allows their motion to be followed, and their size to be estimated, though no structural detail can be discerned.

Another instrument, the fluorescent microscope, is used to study the chemical composition of cells. In fluorescence microscopy, a specimen that has been selectively stained with fluorescent dyes is illuminated with ultraviolet light, which makes the stained parts glow.

Operating microscopes are low-powered compound microscopes with several modifications. They do not have a stage, and the illumination system is arranged to shine light down on to the living tissues rather than up through the specimen.