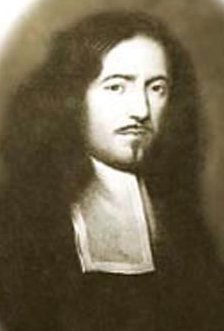 Marcello Malpighi was an Italian anatomist, physiologist, and pioneering user of the microscope. Malpighi, the son of a farmer, was born in Bologna. At the age of 25 he was granted the degree of Doctor of Medicine at Bologna University. After teaching at Pisa and Messina, he returned to his old university where he carried out many of his studies.

Malpighi was one of the most successful of the scientists who pioneered the use of the microscope. His first major work was concerned with developing William Harvey's ideas of the circulation of the blood. Harvey had suggested that the arteries and veins must somehow be connected in order that blood could flow from one to the other, but he was unable to observe any such links. Malpighi, studying the lung of a frog under a microscope, was able to make out the tiny capillary tubes which perform this function. "Hence," he wrote, "it was clear ... that the blood flowed away along tortuous vessels and was not poured into spaces, but was always contained within tubules, and that its dispersion is due to the multiple winding of the vessels."

Malpighi studied a wide variety of subjects. He succeeded in dissecting a silkworm under a microscope, showing that it had a complicated structure just like other animals. Before that it had been believed that such small creatures had no internal organs at all. He also traced the development of the embryo chick in the egg. His investigations into the human body have been recorded in the naming of the Malpighian layer (one of the layers of the skin) and the Malpighian bodies in the kidney.

Together with Nehemiah Grew (1628–1711), Malpighi is considered to be one of the founders of the study of plant anatomy, for he examined in detail the structure and development of many plants. During the last years of his life he held the post of medical adviser to Pope Innocent XII.