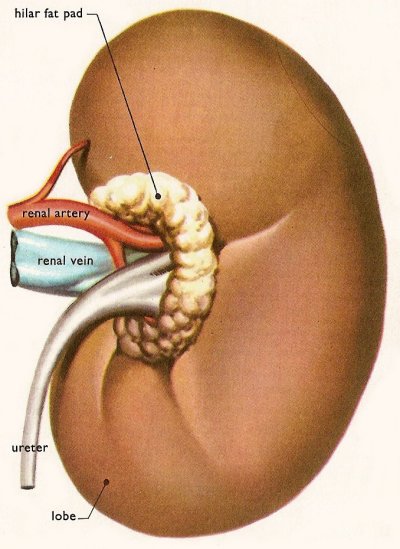 Right kidney, seen from behind. 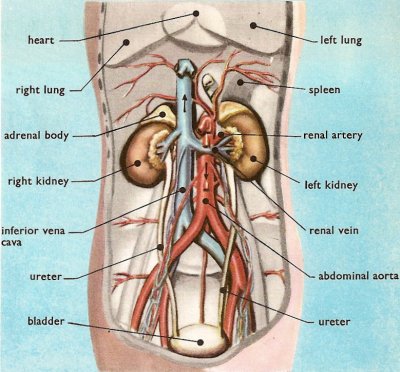 Location of the kidneys. 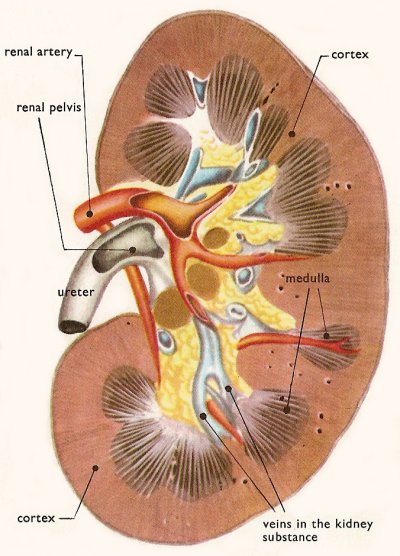 Section of left kidney, seen from the front. 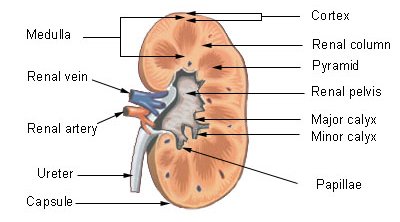 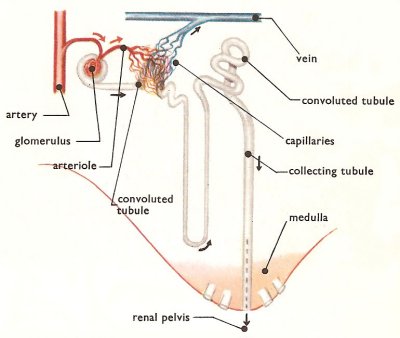 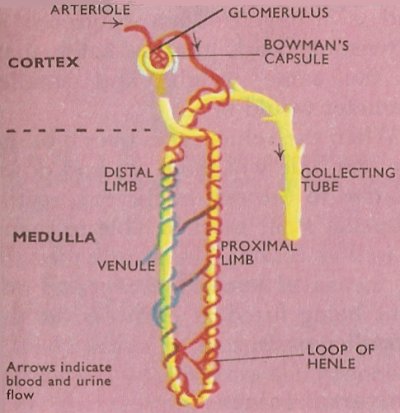 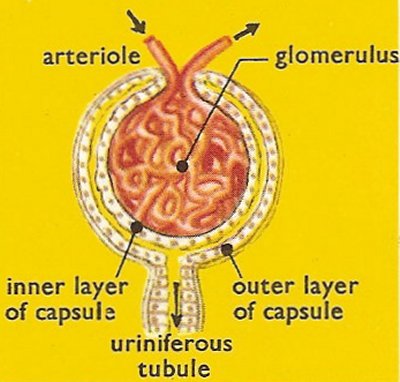 Close-up of a Malpighian capsule.

The kidneys are the primary organs of the urinary system in vertebrates. The kidneys filter the blood, remove the wastes, and excrete the wastes in the urine. About 1,300 milliliters of blood flow through the kidneys each minute (about 400 gallons a day). From this blood the Malphigian corpuscles (see below) extract about 170 liters of filtrate a day. As this fluid passes down the uriniferous tubules it is almost all reabsorbed. Only about 1.5 liters are left in the tubules to carry away the waste products.

The whole blood supply passes through the kidneys every 5 minutes, ensuring that waste materials don't build up. The renal artery carries blood to the kidney, while the renal vein carries blood, now with much lower concentrations of urea and mineral ions, away from the kidney. The urine formed passes down the ureter to the bladder.

The kidneys are paired, bean-shaped organs. Adult human kidneys, are approximately 12 cm long, 6 cm wide, and 3 cm thick. They are situated in the abdominal cavity, just below the rib-cage, one on either side of the spine. More specifically, they lie between the twelfth thoracic vertebra and third lumbar vertebra.

The right kidney usually is slightly lower than the left because the liver displaces it downward.

The kidneys, protected by the lower ribs, lie in shallow depressions against the posterior abdominal wall and behind the parietal peritoneum. This means they are retroperitoneal.

Each kidney has an indentation, called the hilum, on the medial side. The hilum leads to a large cavity, called the renal sinus, within the kidney. The ureter and renal vein leave the kidney, and the renal artery enters the kidney at the hilum.

The outer, reddish region, next to the capsule, is the renal cortex. This surrounds a darker reddish-brown region called the renal medulla. The renal medulla consists of a series of renal pyramids, which appear striated because they contain straight tubular structures and blood vessels. The wide bases of the pyramids are adjacent to the cortex and the pointed ends, called renal papillae, are directed toward the center of the kidney. Portions of the renal cortex extend into the spaces between adjacent pyramids to form renal columns. The cortex and medulla make up the parenchyma, or functional tissue, of the kidney. The central region of the kidney contains the renal pelvis, which is located in the renal sinus and is continuous with the ureter. The renal pelvis is a large cavity that collects the urine as it is produced. The periphery of the renal pelvis is interrupted by cuplike projections called calyces. A minor calyx surrounds the renal papillae of each pyramid and collects urine from that pyramid. Several minor calyces converge to form a major calyx. From the major calyces the urine flows into the renal pelvis and from there into the ureter.

Each kidney contains over a million functional units, called nephrons, in the parenchyma (cortex and medulla). The nephrons make up the bulk of the kidney tissue and join up with larger collecting tubes that eventually form the main urine-carrying duct – the ureter.


Anatomy and physiology of the nephron

The blind end of each nephron, or kidney tubule, lies in the cortex and may be likened to a champagne glass, the walls and stem of which are hollow and one cell thick. The bowl of the tubule is known as the Bowman's capsule (or the glomerular capsule). It surrounds an elaborate knot of blood capillaries – tiny branches of the renal artery – called the glomerulus. Each Bowman's capsule and glomerulus together form the Malpighian body.

The hollow stem of the champagne glass is the upper part of the tubule. This descends into the medulla where it narrows before turning upwards and ascending back into the cortex, increasing in diameter again. The thin portion of the tube is known as the loop of Henle and is primarily concerned with the absorption of water. The ascending limb of the tubule joins a collecting duct which joins with others before eventually discharging its urine into the ureter.

In effect, each Bowman's capsule is a tiny filter. Blood containing waste substances, proteins, sugars, etc., is forced to the kidneys by the pumping action of the heart. Under pressure, a solution is driven out of the capillaries of the glomerulus through the walls of the capsule into its hollow interior. (Materials are supplied to the tissues in a similar way.) The solution in the capsule is blood plasma minus the large (colloidal) molecules. These are two big to pass through the capillary wall.

From the capsule the fluid passes along the tubule. Many of the substances in it are absorbed through the tubule wall into the blood capillaries that envelop this, so that it gradually becomes more concentrated. Organic molecules such as some amino acids and glucose, some salts and water are absorbed in the descending or proximal limb of the tubule, while more water and salts are absorbed in the ascending or distal limb. Certain poisonous or toxic substances that have been rendered harmless are released into the urine by the tubules, together with potassium and hydrogen. Measurements of the amounts of various substances present in the blood and in the urine show striking differences. The concentration of the principal waste substance in the urine (urea) is normally 70 times as great as it is in the blood, yet, surprisingly enough, some urea is reabsorbed, since a certain blood concentration is needed. Ninety times more sulfate, 9 times more potassium, and 25 times more uric acid occur in the urine than in the blood. On the other hand no glucose, fatty substances, proteins, or bicarbonate ions normally occur in the urine, whereas considerable quantities occur in the blood.

The normal daily output of urine is between two and a half to three pints, yet it is calculated that a total of nearly 300 pints of fluid is filtered by the kidneys during that time. They not only reabsorb a vast volume each day; they also regulate its content so that the correct levels of essential substances are maintained in the body fluids.

The juxtaglomerular apparatus, which monitors blood pressure and secretes renin, is formed from modified cells in the afferent arteriole and the ascending limb of the nephron loop.

A kidney stone, known medically as a calculus (plural: calculi), is a small, hard, pebble-like mass formed in the kidney from an accumulation of mineral substances. Passage of a kidney stone through the ureter (the tube leading from the kidney to the urinary bladder) causes intense pain known as renal colic. Kidney stones can be removed by surgery or, if the stones are small, they can be passed out in the urine after treatment, which includes drinking large amounts of water.

A kidney machine is equipment used to perform hemodialysis (removing toxic wastes from the blood) in kidney failure. Plastic tubing is used to pipe blood from the body into the machine, where waste-products are filtered out by the technique of dialysis. Usually two or three sessions are required a week, each lasting about four hours. Today many more patients benefit from the newer technique of peritoneal dialysis, in which fluids are passed through the peritoneal cavity to reduce blood urea.