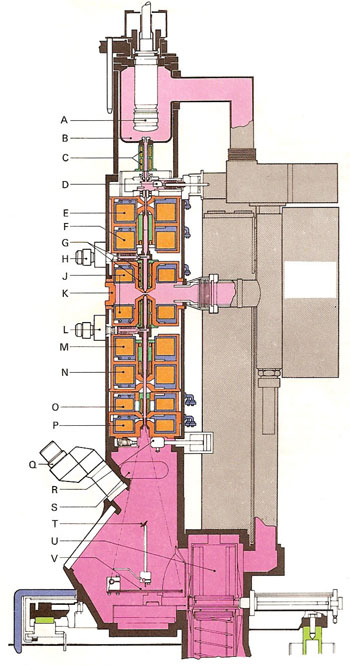 An electron microscope is a microscope that uses a beam of electrons rather than light to study objects too small for conventional microscopes. First constructed by Max Knoll and Ernst Ruska around 1930, the instrument consists typically of an evacuated column of energetic lenses with a 20–1,000 kV electron gun at the top of a fluorescent screen or photographic plate at the bottom; it can thus be thought of as a kind of cathode ray tube. The various lenses allow the operator to see details almost at the atomic level (0.3 nanometers) at up to a million times magnification (though many specimens deteriorate under the electron bombardment at these limits), and to obtain diffraction patterns from very small areas.

In the scanning electron microscope, the beam is focused to a point and scanned over the specimen area while a synchronized television screen displays the transmitted or scattered electron intensity.

In the scanning tunneling microscope a tiny metal probe on a movable arm is held in near contact with the specimen, which has to be a conducting material, and scanned across it. An electrical signal, produced when electrons tunnel between the specimen and the probe, is kept constant by raising and lowering the arm. The necessary movements are analyzed by a computer, which generates a contour map of the surface displayed on the computer screen.

Electron microscopes are used for structural defect and composition studies in a wide range of biological and inorganic materials.