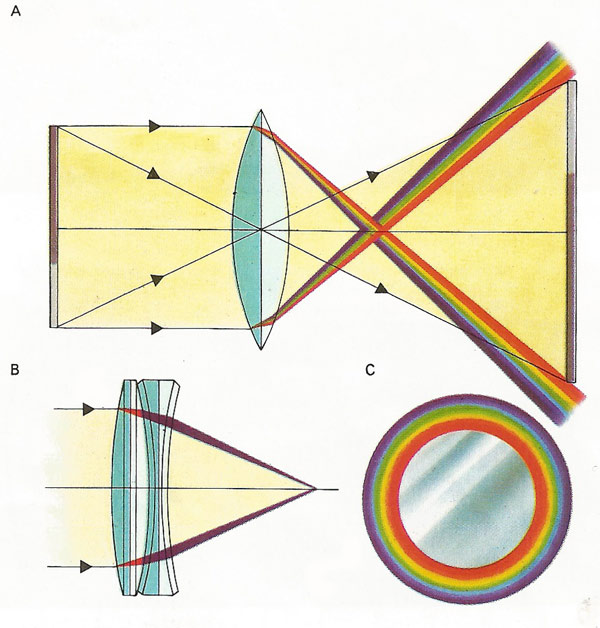 Chromatic aberration produces coloured fringes around the lens edges, and parts of the image may not be sharp [C]. This aberration occurs with single lenses because they behave like prisms and bend blue light more than red light [A]. Combining the lens with a weaker concave lens [B] made of a different glass cancels out this dispersion effect, and both red and blue rays are brought to the same focus to produce a sharper, more distinct image.

Chromatic aberration is a defect in a lens in which the various colors of the spectrum are not brought to the same focus. Blue light, for example, is refracted more than red light when it passes through a lens and hence comes to a focus inside that of red light. The result is fringing – the formation of a colored halo around the image. This problem seriously affected the performance of refracting telescopes for centuries and was the reason that so many refractors were built with large focal ratios: longer focal length lenses show less chromatic error. A better solution came with the introduction of corrective elements, using at least two different types of glass, into a compound lens. An achromatic lens corrects for red and blue light, whereas an apochromatic lens corrects for at least red, blue, and green. Reflecting telescopes are free from this type of aberration.

An achromatic is a lens with two or three closely-spaced, often cemented, elements designed to produce images largely free from false color. It has at least one element of flint glass and another of crown glass – the dispersion of the latter compensating for the chromatic aberration of the former. While achromatic lenses bring two primary colors (red and blue) into focus at the same point, they leave some uncorrected chromatic aberration at wavelengths in between. This variation is negligible for most purposes, and a single focal-length value is applied to the entire visible spectrum. Aberration can be further reduced by using an apochromatic lens.

An apochromatic is a lens or optical system that is virtually free of chromatic aberration. For practical purposes this means that light of at least three different wavelengths is brought to focus at the same point. The best apochromatic lenses use fluorite crystal and may correct three wavelengths with only two optical elements. However, because fluorite is expensive to manufacture, and, because of its brittleness, difficult to grind, polish, and mount, high quality apochromatic refracting telescopes are costly. Reflecting telescopes, on the other hand, are apochromatic in performance without the extra expense.