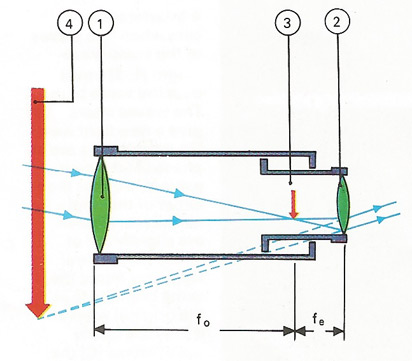 A simple refracting telescope has a similar optical system to a microscope. It consists of an objective lens [1] (of focal length fo) and an eyepiece lens [2] (of focal length fe). Parallel light from a distant object converges to form an inverted image [3]. Light rays then appear to come from the large upside-down image [4].

A refracting telescope, or refractor, is a telescope that uses a lens or system of lenses to gather light from a distant object and bring it to a focus. The biggest drawbacks of such an instrument is chromatic aberration, which degrades the sharpness and accuracy of the image by effects such as fringing and false color, and the difficulty and expense of making large lenses. An apochromatic refractor avoids the problem of chromatic aberration to a large extent by bringing all primary colors to focus at the same point. Refractors are no longer built for professional use.

In 1756, John Dollond introduced the first achromatic lenses consisting of a combination of two lenses made from crown and flint glass. By the early 1800s, Joseph Fraunhofer succeeded in applying Dollond's technique to lenses of substantial size. This ushered in the era of giant refracting telescopes which reached its height at the end of the 19th century with the instruments of Alvan Clark, including those at the Lick Observatory and Yerkes Observatory, both of which date back to roughly 1890.

So long as lenses are made of glass, the 40-in (1-m) at Yerkes represents the practical limit in size of refractors. Although glass blanks larger than 40 in in diameter have been cast during the past 50 years, they are seldom, if ever, sufficiently free of internal defects to make satisfactory lenses. Even if an acceptable blank were obtained, the resulting lens, supported only by its edge, would distort so badly from its own weight as to be optically useless.

Before large reflecting telescopes took over in the 20th century, refractors were generally preferred for detailed observations of the planets since, having an enclosed tube, they produced a steadier image.