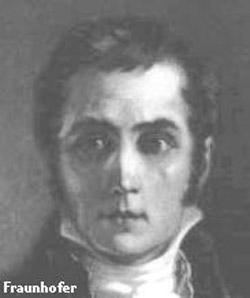 Joseph Fraunhofer was a Bavarian physicist and optician who devised the first spectrometer and used it to identify dark lines in the Sun's spectrum now known as Fraunhofer lines. A skilled lens-grinder and instrument-maker, he built the 9-inch (24-cm) Dorpat refractor, installed at the Pulkovo Observatory in Russia around 1825, and the 16-cm heliometer used by Bessel to measure the parallax of 61 Cygni. He also developed a type of equatorial mounting that became known as the German mount.

Born in Straubing, Bavaria, Fraunhofer was orphaned at the age of 11. He did an apprenticeship as a lens- and mirror-maker, after which he became employed in a Munich company making scientific instruments. He learned mathematics and became very skilled in applied optics. He was active in the Bavarian academy of sciences, where his skills in applied optics attracted attention. In 1823 he was appointed director of the Physics Museum in Munich, and received the (honorary) title of Professor. He died of tuberculosis in Munich in 1826.

In 1812–14 Fraunhofer was fully engaged in the design of achromatic objective lenses for telescopes, which required the accurate determination of refractive indices of optical glasses. Examining the spectrum of solar light passing through a thin slit, he noticed a multitude of dark lines. These had not been noticed by Newton in 1666 because he shone light from the whole solar disk through a circular hole into his prisms. They had been noticed by William Wollaston in 1802, who, however, recorded the presence of only seven dark lines. Well aware that some of these lines could be used as wavelength standards, Fraunhofer accurately measured the position of 324 of the 500 or so lines he could see in his solar spectrum. He labeled the most prominent spectral lines with letters, establishing a nomenclature that survives to this day. Although he did notice and comment upon the wavelength coincidence between his D line and a prominent line in laboratory flame spectrum (now known to be due to sodium), he did not pursue the matter much further.

Fraunhofer did succeed, in 1817, in designing an achromatic objective lens; with minor modifications, his design is still in use today.