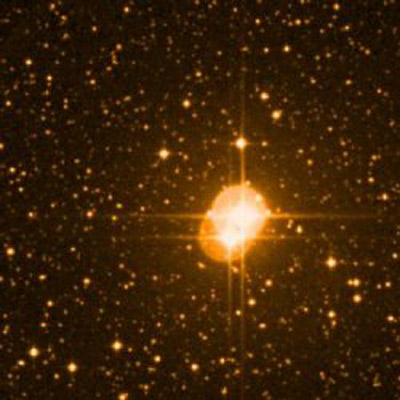 61 Cygni is a nearby binary star system that consists of two orange-red K-type dwarfs moving in a highly elongated orbit about each other with a mean separation of about double the distance of Pluto from the Sun. The brighter star 61 Cygni A is of apparent magnitude 5.2, the fainter 61 Cygni B is 6.1.

61 Cygni lies in the constellation Cygnus, southeast of Sadr (Gamma Cygni) and can just be glimpsed with the naked eye. It was christened the "Flying Star" in 1792 by Giuseppe Piazzi for its unusually large proper motion – the largest of any star that is visible to the naked eye. In 1838, it became the first star (other than the Sun) to have its distance to Earth successfully calculated, by Friedrich Bessel, using trigonometric parallax. Both components appear to be slightly variable.

The 61 Cygni system is the location of Hal Clement's fictional fast-rotating planet, Mesklin, in Mission of Gravity. In the Star Trek universe, 61 Cygni is the home of the Tellarite race.