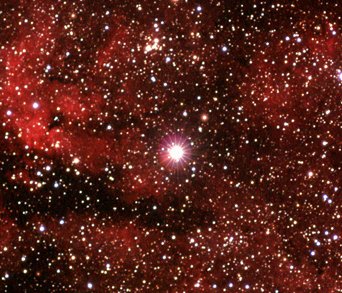 Sadr is the third brightest star in the constellation Cygnus and the center star of the Northern Cross. Sadr lies at the northern end of the Great Rift with a spectacular portion of the Milky Way as a backdrop. Its name comes from an Arabic phrase meaning "the hen's breast."

Unlike most supergiants, which are either fairly hot or quite cool and reddish, Sadr is yellow-white and in the mid-temperature range. It has left the main sequence and is now near a region of temperature and luminosity in which stars become unstable and pulsate.