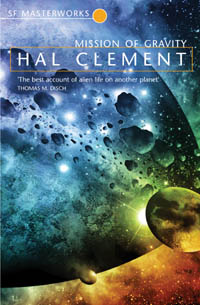 Mission of Gravity is a science fiction novel by Hal Clement1 (1954) set on the giant, rapidly rotating planet of Mesklin where the effective gravity varies between 700-g at the flattened poles and 3-g at the equator. Under these seemingly less than ideal conditions, life and intelligence have evolved. The Mesklinites are giant centipede-like creatures, derived from aquatic jet-propelled ancestors, which have diverged in biology and culture according to where they live on the planet. A spacecraft from Earth crashes at the planet's north pole and a rescue mission ensues in which the Mesklinite known as Barlennan takes on the role of hero. Although Clement provides no great insight into novel extraterrestrial psychologies, his book is one of the earliest systematic attempts to invent a world with an ecology to match.