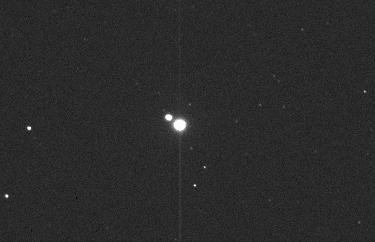 Fig 1. The binary star Albireo (Beta Cygni), which consists of two stars orbiting around each other every 7,300 years at a mean distance of about 650 billion kilometers (400 billion miles). 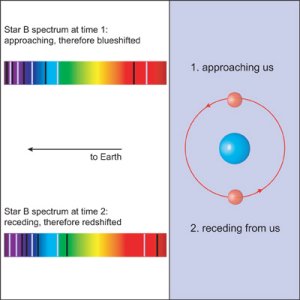 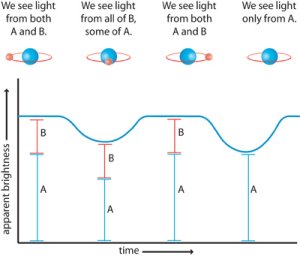 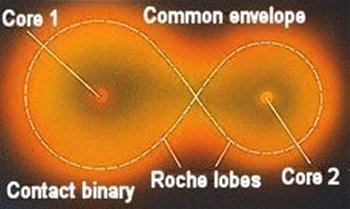 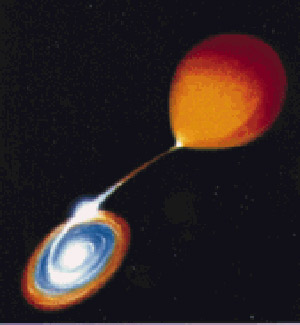 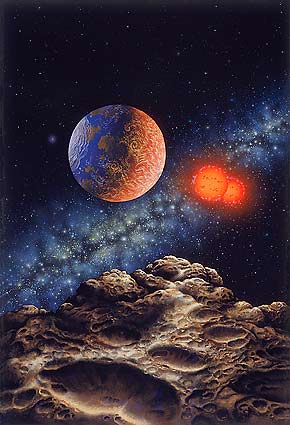 A binary star is two stars in orbit around their common center of mass and held together by their mutual gravitational pull. Surveys have shown that one star in every two or three is a member of a binary or multiple star system. The two components of a binary system each move in an elliptical orbit around their common center of gravity. The further apart they are, the slower they move. Their orbital periods may be measured in tens, hundreds, or even millions of years.

The point in the orbital motion of a binary star system when the two stars are closest together is called the periastron; when they are furthest apart, it is known as the apastron.

A visual binary is one whose components can be resolved visually or photographically (Fig 1). Visual binaries tend to be systems that are relatively close to us and whose components are widely separated in space – by at least a few hundred million kilometers and, in many cases, much more than that. Less than 1,000 visual binaries are known, including well known ones such as Alpha Centauri, Albireo (Beta Cygni), and Sirius (Alpha Canis Majoris).

A spectroscopic binary is a binary star in which the two components are so close together (see close binary), or so far from the Sun, that they cannot be resolved simply by looking at them, even through a powerful telescope. Their binary nature can, however, be established because of the Doppler shift of their spectral lines (Fig 2).

As the stars revolve around their common center of gravity, they alternately approach and recede in the line of sight. This motion shows up in their combined spectra as a regular oscillation or doubling of the spectral lines. Double-lined spectroscopic binaries have two sets of spectral features, oscillating with opposite phases. Single-lined spectroscopic binaries have only one set of oscillating spectral lines, owing to the dimness of the secondary component.

In most cases, the components of a spectroscopic binary are so close together that each is distorted into a nonspherical shape.

The first spectroscopic system to be discovered was Mizar (Zeta Ursae Majoris) in 1889.

An astrometric binary is a binary star in which the presence of a dim component is revealed by a regular "wobble" or oscillation in the motion of a much brighter component. Not many binaries have been detected astrometrically mainly because observations must be made regularly over a long period of time to detect the periodic wobbles in the motion of the brighter or primary component. Sirius was the first star to be recognized as an astrometric binary, although Sirius A (the bright component we can see with the unaided eye) and the much fainter, white dwarf companion. Sirius B, are now considered to be a visual binary.

An eclipsing binary is a binary star system in which the components periodically pass in front of one another as seen from Earth (Fig 3). When this happens the total light received from the system is reduced. The primary minimum occurs when the component with the higher surface luminosity is eclipsed by its fainter companion. The most famous eclipsing binary is Algol, which dims for about 10 hours every 2.87 days.

A close binary is a binary star system in which the separation of the components is comparable to the diameter of the stars. There are three main types, distinguished by the extent to which each star fills its Roche lobe.

In a detached binary, neither star fills its Roche lobe, so that there is no significant mass transfer between the components. In a semidetached binary, one of the stars fills its Roche lobe, which results in this star losing material in a matter stream that either falls directly onto its companion, or, as is more usual, that enters an accretion disk. In a contact binary both components fill their Roche lobes or, more often, overflow them so that there is a common convective envelope.

The proximity of stars in close binaries typically stretches at least one component into an ellipsoidal variable, and often produces an eclipsing binary as well.

Three main types of eclipsing binary are distinguished on the basis of their light curves: Algol stars, Beta Lyrae stars, and W Ursae Majoris stars. Eclipses may also occur in some kinds of cataclysmic binary, including dwarf novae, novae, and symbiotic stars. Exactly how the light varies depends on the nature of the component stars and their separation.

An overcontact binary is a close binary in which both stars have exceeded their Roche lobes, so that the system consists of a common, dumbbell-shaped envelope surrounding two stellar cores. Overcontact binaries are also often eclipsing binaries of the W Ursae Majoris star type.

A common-envelope star is a close binary system in which a relatively massive donor star transfers material faster than it can be digested by a less massive accreting star. As a result, the transferred material eventually overflows the latter's Roche lobe, forming a common envelope around both stars. Frictional drag between the common envelope and the stars causes the two stars to spiral inward and the common envelope to be ejected. In this way it is possible for the components of a binary to reduce their separation from many AU (corresponding to an orbital period of tens of years) to a few stellar radii (corresponding to an orbital period of hours). One possible example of a star in the process of ejecting its common envelope is Eta Carinae.

A cataclysmic binary is a close binary system consisting of a white dwarf primary and an orange or red (K- or M-type) main-sequence or giant secondary, in which matter flows from the secondary toward the primary (Fig 5). In most cases, the stripped hydrogen-rich gas enters an accretion disk around the white dwarf and may subsequently fall onto the condensed star to ignite violently in a fusion reaction. Cataclysmic variables fall into two groups. The non-magnetic group, which is by far the most populous, includes U Geminorum stars (dwarf novae) and classical and recurrent novae. The much rarer, magnetic group includes AM Herculis stars and DQ Herculis stars and is distinguished by the presence of a powerful magnetic field around the primary that dramatically affects the accretion flow.

Two key questions arise when considering whether life could evolve in a binary or multiple star system (Fig 6). They are: (a) is it possible for planetary systems to form around such stars, and (b) if it is, can planets orbit so as to provide tolerable surface conditions for biological activity?

On the subject of planet formation, it has been suggested that the gravitational disturbance caused by another nearby star might prevent material from settling into a stable protoplanetary disk. However, evidence is now to hand of such a disk around one of the stars in a young binary system. Assuming then that planets do form, could they support life? Before 1960, it was generally thought not. Then the Chinese-American astronomer Su-Shu Huang showed that there existed various special orbits in which a planet could move in a two-star system and enjoy clement, stable temperatures.

Basically, there are three possibilities: a wide, roughly circular path around both stars, a figure-eight orbit around both stars, or a small orbit around just one star. The exact circuits required for habitability would depend on details such as the type of stars involved and their separation distance. Due to its proximity to the Sun, the Alpha Centauri system has been widely discussed in this regard.

In fiction, Brain Aldiss has speculated what effects the climatic swings of a planet circling around a binary star might have on the social structures of its inhabitants. In his Heliconia series, he looks at life and culture on a world orbiting in a complex planetary system of a binary star such that its seasons lasts hundreds of years.