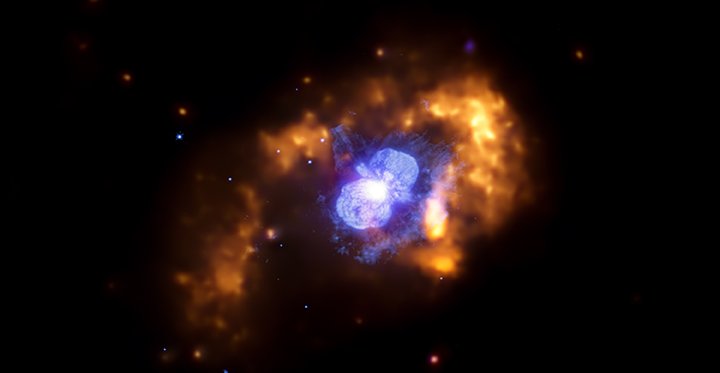 A composite optical and X-ray image of Eta Carinae and the material it cast off in a vast outburst more than a century and a half ago. The blue regions show the cool optical emission from dust and gas thrown off the star in the form of a bipolar shell. This is surrounded by a ragged cloud of fainter material. An unusual jet points from the star to the upper left. The orange and yellow region shows the X-ray emission produced as material thrown off Eta Carinae rams into nearby gas and dust, heating gas to temperatures in excess of a million degrees. This hot shroud extends far beyond the cooler, optical nebula and represents the outer edge of the interaction region. Credit: X-ray: NASA/CXC/GSFC/M.Corcoran et al.; Optical: NASA/STScI. 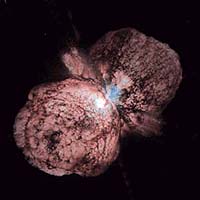 Eta Carinae and the Homonculus Nebula.

Eta Carinae, in the southern constellation Carina, is one of the most massive and remarkable known stars in our galaxy. Surrounded by the largest diffuse nebula in the sky, the Eta Carinae Nebula, it is an S Doradus star with a mass of over 100 solar masses and a luminosity about 4 million times greater than that of the Sun, putting it close to the theoretical limit of stellar stability. Only by shedding matter at the prodigious rate of 0.1 solar mass per year has it managed to stay in one piece so far.

The variability of Eta Carinae is extraordinary. In 1843, it reached a visual magnitude of -1, making it, briefly, the second brightest star after Sirius, despite its distance of some 7,500 light-years. Accompanying this visual brightening was an expulsion of about 10 solar masses of material from the star's polar regions. This material, spewed from the star at speeds close to 700 km/s, formed two large, grayish, bipolar lobes, nicknamed the Homonculus Nebula, that have been photographed in spectacular detail by the Hubble Space Telescope. Each lobe currently expands at a rate of 2.4 million km/h and spans about 6.4 trillion km. After the great eruption of the mid-19th century, Eta Car faded in spurts to below naked-eye visibility, settling at about seventh magnitude. Recently, it has started to brighten again, gaining a full magnitude from 1950 to 1992 and is continuing its ascent.

Eta Car emits powerfully across a range of wavelengths. At some infrared wavelengths, the star and its nebula are the brightest objects in the sky beyond the Solar System. The mid-infrared emission originates in dust ejected by the star during giant mass-loss events within the past several hundred years. X-rays come from an outer, horseshoe-shaped ring with an electron temperature of about 3 million K, that is about 2 light-years in diameter and was probably caused by an outburst that happened more than a thousand years ago. Regular, small-scale variations in the star's ultraviolet and X-ray output, with a period of 5.5 years, have led to the suggestion that Eta Car is actually a binary star. According to this theory, previous eruptions may have been due to the orbital interactions of the two stars. As for the star's powerful X-ray emission, most astronomers agree that this is the result of the collision of two dense stellar winds, but whether these emanate from the two stars of a close interacting binary system or from the fast and slow stellar winds of a single star remains unclear. One thing seems certain: Eta Carina is doomed to explode as a supernova in the not-too-distant future.