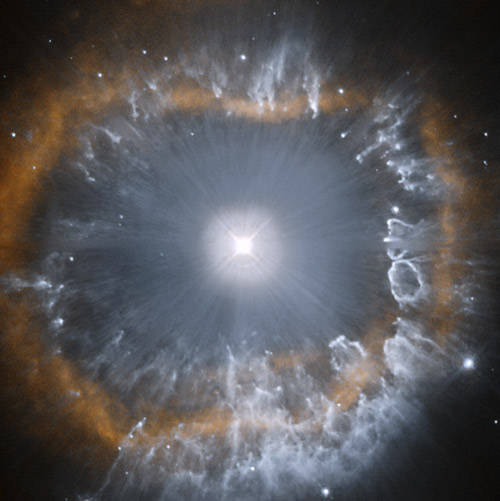 S Doradus is the brightest star in the Large Magellanic Cloud (LMC), one of the brightest stars known, and the prototype for the class of variable known as S Doradus stars. It lies in the young open cluster NGC 1910 on the northern rim of the LMC's central bar.

S Doradus is a blue supergiant with a spectrum very similar to that of P Cygni (see P Cygni profile), another variable of the same type. These stars are extremely massive (at least 60 solar masses) and luminous, using up their nuclear fuel so fast that their lifetimes can't exceed a few million years; they will then explode as supernovae. The very high luminosity also results in an enormous radiation pressure at the star's surface, which tends to blow away significant portions of the stellar mass by way of an intense stellar wind and, occasionally, in the form of an ejected gaseous shell. The light curve of S Doradus also points to a long period (40-year) eclipsing variable behavior.

Recent observations of S Dor have shown that its optical spectrum now resembles that of an F-type supergiant, with a rich complex of absorption lines. Despite nearly 50 years of spectroscopic monitoring, such a spectrum has never previously been seen for S Dor despite many occasions when the star was equally bright. Such F-type spectra have, however, been seen in other luminous blue variables, including Var B in M33 during a recent outburst, and in Eta Carina during an outburst in 1893. The singly ionized metal lines arise in a layer moving away from the star (toward us) at 50 km/s, consistent with the lines forming in a "pseudo photosphere" originating in the stellar wind. The temperature suggested by the F-type spectrum is as cool as an LBV can get.

An S Doradus star is a massive, blue supergiant variable star, also known as a Hubble-Sandage variable or a luminous blue variable. S Doradus stars are the most luminous stars in the Galaxy and are easily identified in other nearby galaxies, including the Andromeda Galaxy and the Triangulum Galaxy. They are named after the prototype, S Doradus.

Only about 20 such stars, with the classification SDor, are listed in the General Catalogue of Variable Stars, making them among the rarest types of star known.

It is not the case that all S Dor variables are always spectacular. Indeed, it has been estimated that most of them will not be spectacular at all for at least 70% of their lifetime as an S Dor variable.

A. E. van Vogt imagined a planet around S Doradus. To avoid the star's searing heat, this world moves in such a large orbit that its "year" is equal to 4,000 Earth years. Seen from the surface, S Doradus is a spark lost in the fluorescence its radiation excites in the planet's upper atmosphere.