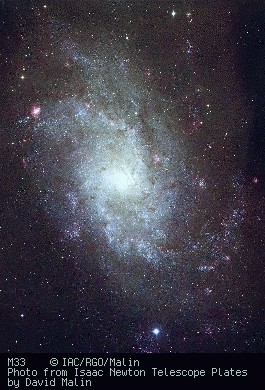 The Triangulum Galaxy (M33, NGC 598) is a nearby type Sc spiral galaxy that is a prominent member of the Local Group. With about half the diameter of the Local Group's two dominant systems, the Andromeda Galaxy and our own Milky Way, M33 is an averaged-sized spiral, with a mass of between 10 and 40 billion solar masses.

The Triangulum Galaxy was probably first found by Hodierna before 1654 and independently rediscovered by Charles Messier in 1764.

Despite its modest size, M33 is home to one of the largest H II regions known: NGC 604, with a diameter of nearly 1,500 light-years and at least 200 newly-formed hot massive stars. It also has globular clusters and, possibly, its own satellite galaxy, LGS 3. (M33, in turn, may be a remote but gravitationally bound companion of the Andromeda Galaxy).

For the amateur observer, the Triangulum Galaxy can be glanced with the naked eye under exceptionally good conditions, making it, for those with keen eyesight, the most distant object visible without optical aid. It is outstanding in good binoculars, but as its considerable total brightness is distributed quite evenly over an area of nearly four times that covered by the full Moon, its surface brightness is extremely low.

M33 was the initial target of a 1975 SETI investigation by Frank Drake and Carl Sagan using the Arecibo radio telescope. The study was extended, with negative results, to other nearby galaxies at wavelengths of 21, 18, and 12.6 cm.