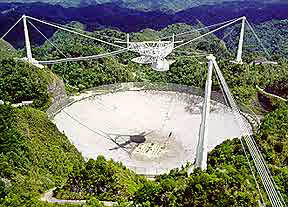 The Arecibo radio telescope is the second largest single-dish radio telescope in the world. It is located at the Arecibo Observatory, is operated by Cornell University for the National Science Foundation, and came into operation in 1963. Occupying a large karst sinkhole in the hills south of Arecibo in Puerto Rico, its area of almost 9 ha was greater than that of all other such instruments in the world combined until the completion of the Five-hundred-meter Aperture Spherical Radio Telescope (FAST) in China in 2016.

The surface of Arecibo's 305-m (1,000-ft) fixed, spherical dish is made from almost 40,000 perforated aluminum panels, each measuring 1 meter by 2 meters (3 feet by 6 feet), supported by a network of steel cables strung across the underlying depression. Suspended 150 m (450 ft) above the reflector is a 900-ton platform which houses the receiving equipment. Although the telescope is not steerable, some directionality is obtained by moving the feed antenna (upgraded in 1996). The immense size and accurate configuration of the dish allows extremely faint signals to be detected. For this reason, it has been used extensively in SETI investigations and in the first attempt at CETI (see Arecibo Message). It also featured in the film Contact.