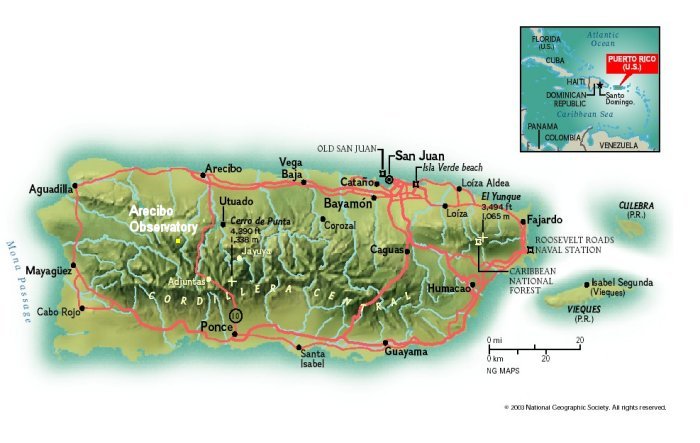 Arecibo Observatory is a facility of the National Astronomy and Ionosphere Center (NAIC) located 19 km (12 mi) south of Arecibo, Puerto Rico. Its principal instrument is the 305-m Arecibo radio telescope.

The Observatory had its origins in an idea of Professor William E. Gordon, then of Cornell University, who was interested in the study of the ionosphere. Gordon's research during the 1950s led him to the idea of radar back scatter studies of the ionosphere. Gordon's persistence culminated in the construction of the Arecibo Observatory which began in the summer of 1960. Three years later the Arecibo Ionospheric Observatory (AIO) was in operation under the direction of Gordon. The formal opening ceremony took place on November 1, 1963.

From the outset the site had to meet certain requirements. It had to be near the equator, since there, a radar capable of studying the ionosphere could also be used to study nearby planets which pass overhead. The Arecibo site offered the advantage of being located in Karst terrain, with large limestone sinkholes which provided a natural geometry for the construction of the 305-m reflector.

In addition an Optical Laboratory with a variety of instrumentation used for the passive study of terrestrial airglow is located at the Observatory. A lidar (Light Detection And Ranging) together with a Fabry-Perot interferometer is primarily used to measure neutral winds and temperatures of the middle atmosphere This capability complements that of the incoherent scatter radar, and gives Arecibo a unique capability in the world in terms of aeronomic research.

On October 1, 1969 the National Science Foundation took over the facility from the Department of Defense and the Observatory was made a national research center. On September 1971 the AIO became the National Astronomy and Ionosphere Center (NAIC).

In 1974 a new high precision surface for the reflector (the current one) was installed together with a high frequency planetary radar transmitter. The second and major upgrade to the telescope was completed in 1997. A ground screen around the perimeter of the reflector was installed to shield the feeds from ground radiation. The gregorian dome with its subreflectors and new electronics greatly increases the capability of the telescope. A new more powerful radar transmitter was also installed.

About 140 people are employed by the Observatory providing everything from food to software in support of the operation. A scientific staff of about 16 divide their time between scientific research and assistance to visiting scientists. Engineers, computer experts, and technicians design and build new instrumentation and keep it in operation. A large maintenance staff keeps the telescope and associated instrumentation as well as the site in optimal condition. A staff of telescope operators support observing 24 hours a day.