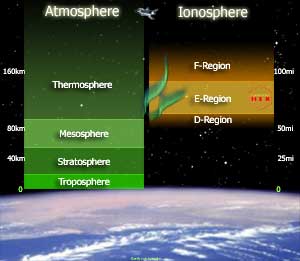 The ionosphere is the part of the atmosphere that is kept partially (up to 0.1%) ionized by ultraviolet light and X-rays from the Sun. It lies immediately above the stratosphere, roughly between altitudes 50 and 500 km, and is divided into three main layers, D, E, and F, on the basis of radio wave propagation properties.

The D layer, below about 80 km altitude, mainly absorbs radio waves. So-called sudden ionospheric disturbances are due to enhancements of the daytime D layer caused by solar flares. The E layer, between about 80 and 120 km, is reflective to short-wave radio and so can be used to bounce signals between distant stations on the ground; however, day-night variations in electron density result in marked variations in reflectivity. The F layer, upward of 120 km altitude, is also reflective and divides during the day into the F1 and F2 regions. The F2 region has the greater electron density, which peaks at midday at an altitude of 250 to 300 km. The F1 region has a smaller peak in electron density, which forms at around 170 km in the daytime. Above the F region is a region of exponentially decreasing density known as the topside ionosphere that extends to an altitude of a few thousand kilometers and, at mid-latitudes, feeds into the plasmasphere.

The mesopause is a level in the ionosphere, at an altitude of about 85 kilometers, above which temperatures rise as altitude increases instead of falling as they do in the lower ionosphere.