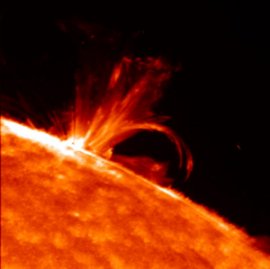 A solar flare is a sudden and dramatic release of energy through a break in the Sun's chromosphere in the region of a sunspot, which may last from a few minutes to a few hours. Following an intense solar flare (electron density 1011 compared with 108 in solar quiet times) the ionization in Earth's atmosphere may increase by several orders of magnitude leading to effects such as bright aurorae, magnetic storms, and radio interference.

Solar flares are classified on a scale of importance ranging from 3+ (largest area) to 1- (smallest area). The largest solar flares eject a mass of about 10 billion tons at a speed of roughly 1,500 km/s.

A proton flare is a flare producing significant fluxes of greater-than-10 MeV protons in the vicinity of the Earth.

Solar flares are often observed using filters to isolate the light emitted by hydrogen atoms in the red region of the solar spectrum (the H-alpha spectral line). Most solar observatories have H-alpha telescopes and some observatories monitor the Sun for solar flares by capturing images of the Sun every few seconds.

The key to understanding and predicting solar flares is the structure of the magnetic field around sunspots. If this structure becomes twisted and sheared then magnetic field lines can cross and reconnect with the explosive release of energy.