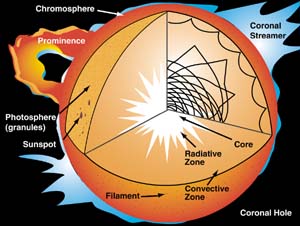 The chromosphere is a narrow, irregular region of a star's atmosphere that lies between its photosphere and its corona. The chromosphere of the Sun is the source of many solar phenomena including flares and prominences.

The chromosphere ('color sphere') is so-named because when visible immediately before and after a total eclipse, its light is dominated by the red glow of H-alpha. At other times it can be observed using H-alpha and calcium K-line filtergrams and, from space, in ultraviolet emission lines.

The chromospheric network is an ever-present network of long thin sinuous chains of tiny low-contrast brighter points called filigree (also found in plages) extending over much of the solar disk in H-alpha. These points, or network elements, often have darker spicules or short fibrils sticking out of, or running over them (part of the fine disk detail known as the dark mottles), making the actual network harder to see. The chromospheric network is formed by magnetic field lines related to supergranulation cells in the photosphere.