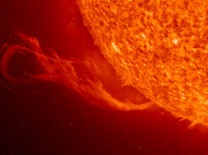 A prominence is a strand of relatively cool (about 10,000 K) gas in the solar corona seen as a bright structure above the Sun's limb against the blackness of space. When the same feature is seen dark in projection against the solar disk it is called a filament. Prominences come in two broad classes: active and quiescent (including quiet region filaments and active region filaments). An active prominence changes in appearance over a few minutes and involves high-speed material motion of up to 2,000 km/s. Active prominences are associated with sunspots and solar flares, can last up to several hours, and take the form of loop prominences, sprays, and surges. Cooler material flowing back from prominences may be seen as coronal rain.

A loop prominence is an arch of high-temperature gas that forms above the Sun's limb after the eruption of a large solar flare, and in which gas drains down to the solar surface. A loop prominence system is a set of such features.

A quiescent prominence is a long, sheet-like prominence of relatively cool solar material that hangs nearly vertically to the Sun's surface for days or months.