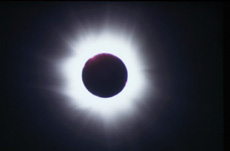 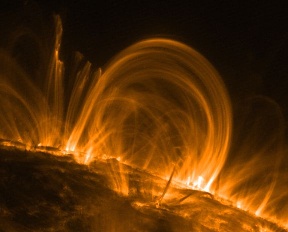 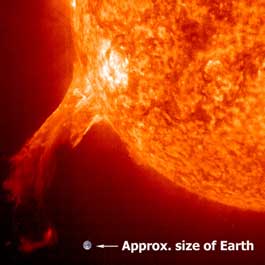 In solar physics, the corona is the tenuous uppermost level of the Sun's (or another star's) atmosphere; lying immediately above the chromosphere, it consists of hot (one to four million K), low-density (about 10-16 g/cm3) gas that extends for millions of kilometers from the Sun's surface.

The so-called white-light corona, visible during a total eclipse (Fig 1) or with a coronograph, has three components. The faint E corona (emission corona) results from emission lines, including forbidden lines of calcium, iron, and some other elements. The K corona (or continuum corona), which is the innermost part of the corona closest to the photosphere, extending to about two solar radii, is caused by sunlight scattering off electrons. The F corona (Fraunhofer corona), lying outermost, is caused by sunlight scattering or reflecting off dust in interplanetary space.

X-rays, too, come from the corona (as well as from solar flares) but not from all parts equally. Movies made from X-ray pictures show that the corona is extraordinarily dynamic with an appearance that changes, not only daily but over the course of a solar cycle. At solar maximum (the period of greatest activity during the solar cycle) the dominant features are coronal loops and streamers associated with active regions, but at minimum these give way to coronal holes at each pole and a sheet-like structure near the equator.

A coronal condensation is an area of the Sun's corona that is hotter (up to 4 million K) and denser than its surroundings. Coronal condensations are seen at the Sun's limb above sunspot groups and show loop structures that outline magnetic field lines.

A coronal hole is a region of the Sun's corona that appears dark in pictures taken with a coronagraph or during a total solar eclipse, and that shows up as a void in X-ray and extreme ultraviolet images. Coronal holes are of very low density (typically 100 times lower than the rest of the corona) and have an open magnetic field structure; in other words, magnetic field lines emerging from the holes extend indefinitely into space rather than looping back into the photosphere. This open structure allows charged particles to escape from the Sun and results in coronal holes being the primary source of the solar wind and the exclusive source of its high-speed component.

During the minimum years of the solar cycle, coronal holes are largely confined to the Sun's polar regions (although some exceptions have been observed by SOHO), while at solar maximum they can open up at any latitudes.

Coronal lines are strong emission lines in the spectrum of the Sun's corona caused by very high excitation metal ions, especially those of iron. The strongest of all is the green coronal green line [Fe XIV] (due to the Fe13+ ion) at 5303 Å. Other prominent ones are [FeX] at 6375 Å and [FeXI] at 7892 Å.

A coronal loop (Fig 2) is a feature in the Sun's corona visible at X-ray, ultraviolet, and white-light wavelengths, consisting of an arch, extending upward from the photosphere for tens or hundreds of thousands of km. Bright coronal loops, in the form of coronal condensations and bright spots, are common around the time of solar maximum. Larger faint ones, lasting days or weeks, are more typical of the quiet corona, when solar activity is low. The two ends of a loop, known as footprints, lie in regions of the photosphere of opposite magnetic polarity to each other.

Until recently, researchers had suspected that coronal loops were essentially static, plasma-filled structures. However, movies made from observations by the TRACE (Transition Region and Coronal Explorer) spacecraft have shown bright blobs of plasma racing up and down the coronal loops. SOHO data confirmed that these plasma blobs were moving at tremendous speeds, leading to the new view that coronal loops are hypervelocity currents of plasma blasted from the solar surface and squirted between the magnetic structures in the corona. Rather than being tubes of plasma enclosed within a magnetic container, the loops are jets of hot plasma flowing along in the alleys between the strong coronal magnetic fields. If coronal loops are indeed currents of plasma being propelled against solar gravity, they would have about the same density along their entire height, like an arc of water from a fountain. Plasma flows are seen in roughly half of all coronal loops visible by TRACE; flows may be present in the remainder but may be too faint for TRACE to detect. The plasma current that forms a coronal loop is probably caused by uneven heating at the bases of the loop, with plasma racing from the hotter end to the cooler end. The bases of a coronal loop are separated by many thousands of km, and there is no reason to assume that the environment at one end will be exactly the same, and input exactly the same amount of heat, as the environment at the other end. Although it isn't clear what causes coronal-loop heating in the first place, these new discoveries may help uncover the mechanism, shedding light on the long-standing mystery of why the corona is hundreds of times hotter than the solar surface.

A coronal mass ejection (CME) is a huge eruption of material from the Sun's corona into interplanetary space (Fig 3). CMEs are the most energetic of solar explosions and result in the ejection, over the course of several hours, of up to 100 billion kg of multi-million-degree plasma at speeds ranging from 10 to 2,000 km/s. They often look like bubbles and, when seen close to the Sun, can appear bigger than the Sun itself, though their density is extremely low.

In contrast to the steady-state solar wind, CMEs originate in regions where the magnetic field is closed and result from the catastrophic disruption of large-scale coronal magnetic structures, such as coronal streamers. CMEs can occur at any time during the solar cycle, but increase in daily frequency from about 0.5 during minimum years to about 2.5 around solar maximum. Fast CMEs – those which outpace the ambient solar wind – give rise to large geomagnetic storms when they encounter Earth's magnetosphere. Such storms, which can disrupt power grids, damage satellite systems, and threaten the safety of astronauts, can result from the passage either of the CME itself or of the shock created by the fast CME's interaction with the slower-moving solar wind.

Coronal rain is material that condenses in the Sun's corona and falls along curved paths onto the chromosphere. Observed in H-alpha light at the solar limb above strong sunspots, coronal rain consists of gas ejected by a loop prominence that returns, several hours later, along the outline of the now invisible loop.

A coronal streamer is a wisp-like stream of particles traveling through the Sun's corona, visible in images taken with a coronagraph or during a total solar eclipse. Coronal streamers are thought to be associated with active regions and/or prominences and are most impressive near the maximum of the solar cycle. Although they can be longer than the diameter of the Sun, they are very tenuous; the material in them gradually moves away from the Sun and becomes part of the solar wind.

A coronagraph is a device for studying the solar corona at any time of the day by creating an artificial eclipse, invented by Bernard Lyot in 1930. It consists of a high-quality refractor in whose focal plane a small disk occults the image of the Sun. The diameter of the disk exactly equals the diameter of the solar image, so that only the faint light from the surrounding corona reaches the end of the instrument where a camera is mounted. For good results, the objective lens must be superbly polished and be entirely free of internal defects such as striations or bubbles. Great care is taken to reduce scattered light by mounting a series of diaphragm stops inside the coronagraph tube. Observations need to be carried out under the most favorable atmospheric conditions – clean air being absolutely essential – so that coronagraphs are normally installed at high-altitude stations.


Other types of corona in astronomy

In planetary astronomy, a corona is a circular to elongate feature (pl. coronae) on the surface of a planet or moon surrounded by multiple concentric ridges. Coronae are thought to be formed by hot spots.

In galactic astronomy, a corona is a region of very hot, tenuous gas that stretches out of the galactic plane in spiral galaxies such as the Milky Way; also known as the galactic corona.