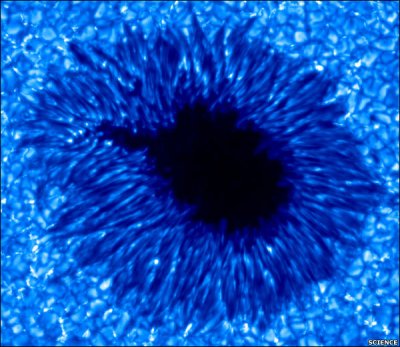 Close-up of a sunspot obtained by the Japanese-led Hinode spacecraft. 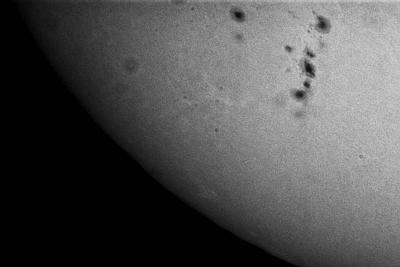 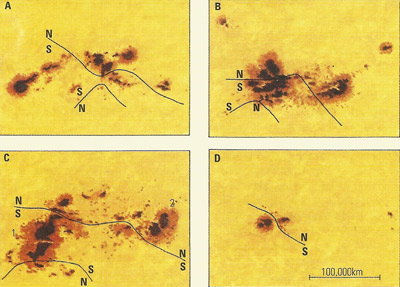 These sunspot observations of 1947 show that on 11 Feb (A), the identities of the leading and following sunspots were still in doubt. But as the lines indicate, the magnetic polarities were clear. From 9 Mar (b) to 7 Apr (C), the leader (1) and follower (2) are distinct. By 5 May (D), activity has ceased.

A sunspot is an area of the Sun's photosphere, typically 2,500 to 50,000 km across, that appears dark because it is cooler than its surroundings. Sunspots are concentrations of magnetic flux and usually occur in pairs of opposite polarity that move in unison across the face of the Sun as it rotates; these pairs are linked by loops of magnetic field that arch through the Sun's corona.

The magnetic flux of a spot (normally measuring about 0.4 tesla but occasionally reaching 1.0 tesla or more), inhibits the rising of convective heat from below and so keeps the spot at a lower temperature – 1,500 to 2,500 K cooler than the rest of the photosphere.

Moderate to large spots usually have a darker central region, known as the umbra, surrounded by a lighter halo, the penumbra, with many short fine fibrils. In the umbra the magnetic field lines tend to be nearly vertical, while in the penumbra they are almost horizontal.

Sunspots are most commonly found within about 30° either side of the Sun's equator, although they can occur at higher latitudes. The lifetime of individual sunspots varies, from as little as a few days, or even hours, to (in the case of the largest spots) several months.

As a whole, sunspot activity rises and falls regularly on a cycle that is approximately 11 years long, the frequency of sunspots varying from a maximum to a minimum level and back again. During a given cycle, the leading sunspots in groups in the northern solar hemisphere all tend to have the same polarity, while the same is true of sunspots in the southern hemisphere, except that here the common polarity is reversed. During the next sunspot cycle, the leading spots in each hemisphere flip to the opposite polarity. From this it's clear that the fundamental period governing solar activity is actually the 22-year magnetic cycle, known as the Hale cycle after George Hale who discovered it in 1925.

A bipolar group is a pair or group (multipolar) of sunspots in which the leading and following spots (with respect to the Sun's rotation) are of opposite magnetic polarity. Such groups obey Hale's polarity law.

Hale's polarity law is the observational rule governing the direction of regions of strong magnetic fields on the Sun, which are grouped in pairs of opposite polarities. At any given time, the ordering of positive/negative regions with respect to the east-west direction (the direction of rotation) is the same in a given hemisphere, but is reversed from northern to southern hemispheres. This rule is named after George Hale who first established it.

The Mcintosh scheme is a classification scheme for sunspots that superceded the older Zürich scheme in 1966. A three-letter code describes the class of sunspot group (single, pair, or complex), penumbral development of the largest spot, and compactness of the group.

The relative sunspot number is a number devised by Rudolf Wolf of Zurich in 1849 to describe sunspot activity. Sometimes called the Wolf number, it is defined as:

where R is the sunspot number, k is a constant depending on the instrument used, g is the number of disturbed regions, and f is the total number of sunspots.

The Evershed effect is the horizontal outward flow of gas in the penumbrae of a sunspots. The effect is named after its discoverer, the English astronomer John Evershed (1864–1956). The maximum outflow velocity is about 2 km/s.