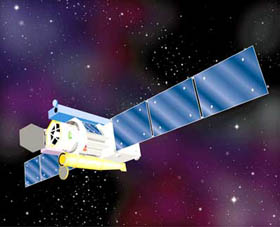 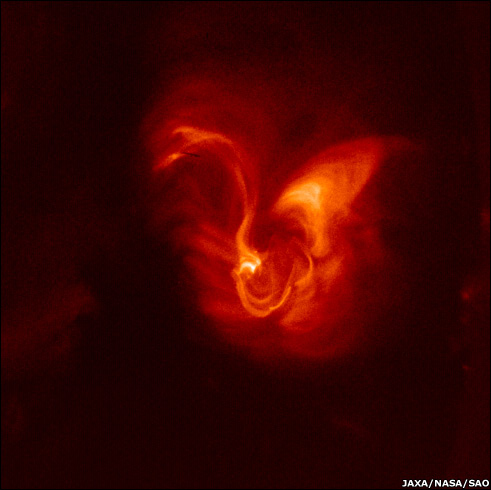 A view of activity on the Sun's surface taken by Hinode's X-ray telescope.

Hinode (Solar-B) is a Japan-led mission, with collaboration from the United States and Britain, which follows on from the highly successful Yohkoh (Solar-A). Hinode (Japanese for "sunrise", and known before launch as Solar-B) observes the Sun in soft (longer wavelengths) X-rays, as does Yohkoh, but will also provide very high-resolution images in visible light.

Hinode carries a coordinated set of optical, extreme ultraviolet, and X-ray instruments to investigate the interaction between the Sun's magnetic field and its corona. The result will be an improved understanding of the mechanisms that underlie solar magnetic variability and how this variability affects the total solar output. In particular, it is hoped that Hinode will be able to shed light on the processes that trigger solar flares, hence leading to an improved early warning system for solar flares that can disrupt communications and pose a hazard to astronauts.

JAXA (Japan Aerospace Exploration Agency) provided the spacecraft, the M-5 launch vehicle, and major elements of each of the scientific instruments. These include a 0.5-meter solar optical telescope (SOT), an X-ray telescope (XRT), and an extreme ultraviolet imaging spectrometer (EIS). Britain's Particle Physics and Astronomical Research Council is responsible for the EIS. NASA provided the focal plane package (FPP) for the SOT as well as components of the XRT and EIS.

Hinode was launched from Uchinoura Space Center on 22 September 2006, into a sun-synchronous orbit that keeps the instruments in nearly continuous sunlight.