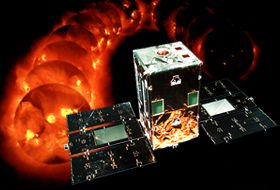 Yohkoh is a Japanese-led mission, launched by ISAS (Institute of Space and Astronautical Science) with collaboration from the United States and Britain, which in 2001 celebrated a decade of solar X-ray imaging. It is the first spacecraft to continuously observe the Sun in X-rays over an entire sunspot cycle and carries the longest-operating CCD (charge-coupled device) camera in space: the instrument that has captured over six million images.

According to the latest projections, Yohkoh will stay in orbit until the next maximum of the solar cycle, around 2010. Over the next few years, it will closely collaborate with RHESSI (Reuven-Ramatty High Energy Solar Spectroscopic Imager), a NASA mission that is providing crucial calibration data for its high-resolution hard X-ray images.

Yohkoh, which means "sunlight," was known before launch as Solar-A.