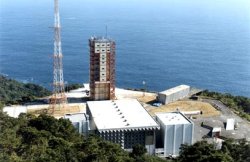 Uchinoura Space Center is one of Japan's two main rocket launch sites. Formerly known as Kagoshima Space Center when it was operated by ISAS (Institute of Space and Aeronautical Science), the name was changed to Uchinoura Space Center (USC) when JAXA (Japan Aerospace Exploration Agency) was formed. About two dozen satellites and their M series launch vehicles (including the latest M-5) and more than 300 sounding rockets have been launched from here. USC also has optical observation posts and a 20-m and a 34-m antenna for satellite telemetry receiving, tracking, and control; in addition, the 34-m dish can be used to back up the 64-meter deep-space antenna at the Usuda Deep Space Center. Whereas Tanegashima Space Center launches satellites for weather, broadcasting, and communications, USC's main launches are for scientific purposes, such as astronomical observation and planetary exploration.

USC covers an area of 71 ha, mostly hilly; its main facilities sit on the top of flattened hills and are connected by roads.

USC was established in Uchinoura (now Kimotsuki) on the east of Ohsumi Peninsula, Kagoshima prefecture, in Feb 1962 as part of ISAS, University of Tokyo, when the original facility in Iwaki (now Yuri-Honjo), Akita prefecture, was closed down. In 1964, the space center became part of ISAS; in 1981 it became an independent research facility – the Kagoshima Space Center (KSC) – attached to ISAS. It was given its present name on October 1, 2003.