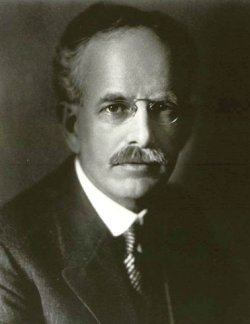 George Hale was an American astronomer who founded the Yerkes Observatory (1897) and served as its first director (1897–1905), Mount Wilson Observatory (1904), and Palomar Observatory (1934), and made important contributions to solar astronomy. Hale was born in Chicago, a single child heir to his family's considerable fortune, and developed an interest in astronomy at an early age. In this he benefited from the continuing moral and financial support of his father, who over the years of his childhood and teenage years purchased him telescopes and spectrometers of increasing power. By 1891 Hale was effectively equipped with his own private solar astronomical laboratory. This unusual opportunity was not lost on Hale, who went on to become one of the foremost astronomers in the United States. In 1890 he graduated from the Massachusetts Institute of Technology with a bachelor's degree in Physics, at which time his scientific reputation was already well established. Although he never completed a doctorate, in 1892 he was appointed professor of Astronomy at the University of Chicago (without salary for the first three years, however), and launched a life-long campaign to fund and build ever better astronomical observatories. Overworked and suffering from recurrent episodes of depression, Hale resigned as director of Mt. Wilson Observatory in 1923, and retired from the active scientific research scene in the following years, arguably at the height of his career. He died on February 21, 1938 in Pasadena, California.

Hale began studying the solar spectrum as a wealthy teenager in Chicago, encouraged by Sherburne Burnham. As an undergraduate at the Massachusetts Institute of Technology he invented the spectroheliograph, which he used to study prominences and other features on the Sun. He worked in his private Kenwood observatory, funded by his father, before being appointed professor of astronomy at the University of Chicago in 1892. Once there he set about establishing a new observatory for the faculty and persuaded the Chicago streetcar magnate Charles T. Yerkes to donate a large sum toward its construction and that of the 40-in Yerkes refractor. Realizing the importance of a mountain location for future observatories, Hale pressed the Carnegie Institution of Washington to establish a solar laboratory on Mount Wilson, California. From here, he made observations showing that sunspots were cooler than the surrounding photosphere (1905) and that they were strongly magnetic (1908). Hale also sought benefactors to build a 60-inch reflector (completed in 1908), using a mirror blank his father bought, and negotiated with J. D. Hooker, a Los Angeles businessman, to finance the construction of Mount Wilson's 100-in reflector (completed in 1918).

As well as solar and stellar astrophysics, Hale encouraged research in galactic and extragalactic astronomy and hired Harlow Shapley and Edwin Hubble as soon as they finished their doctorates. He founded, with James Keeler, the Astrophysical Journal (1895), played a leading role in setting up the International Astronomical Union and the American Astronomical Society, and was instrumental in transforming the Throop Institute of Pasadena into the California Institute of Technology. He suffered seriously from headaches, insomnia, and frequent episodes of metal illness, but the often-repeated story that he believed he was often visited by an elf who advised him on technical matters is a myth stemming from an misunderstanding by one of his biographers. His last major contribution to science was to instigate and obtained funding (from the Rockefeller Foundation) for the observatory on Mount Palomar and its great 200-in telescope. Although he died before the realization of his greatest dream, the giant Palomar telescope, which revolutionized astronomy, was completed and dedicated to him in 1948 (see Hale Telescope).

Although not outspoken on the subject of extraterrestrial life, Hale did play a role in discrediting the hypothesis of the martian canals. In January 1910, he wrote to Antoniadi:1

In spite of the very fine seeing on certain occasions, which required a power of 800 to show the smallest details with an aperture of 44 inches, no trace of narrow straight lines, or geometrical structure, was observed... I am thus inclined to agree with you in your opinion (which coincides with that of Newcomb) that the so-called "canals" of Schiaparelli are made up of small irregular regions.