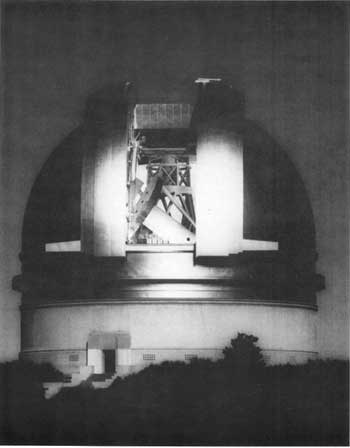 The Hale Telescope visible through the opening in the dome. 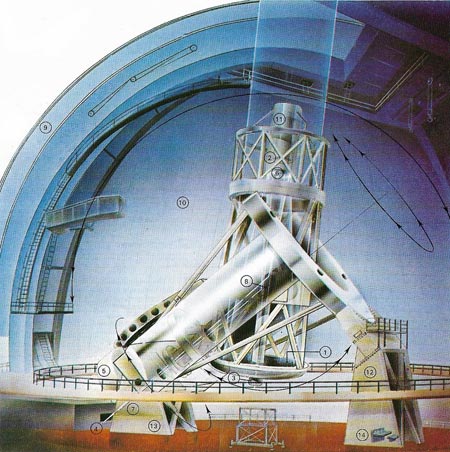 Palomar Observatory is a facility that was built with funds from the Carnegie Institution of Washington and the California Institute of Technology to house the 200-in (5-m) Hale Telescope. It is also the site of the 48-in (1.2-m) Samuel Oschin Telescope, which is a large Schmidt camera used for astronomical surveys, and other smaller instruments. Work on the observatory began in 1934 but was not completed until after World War II.

The Hale Telescope is the 200-in (5-m) reflector at Palomar Observatory. It was inaugurated in 1948, named in honor of George Hale, and was for many years the world's largest optical telescope.

The 48-in (1.2-m) Samuel Oschin Telescope is one of the largest Schmidt cameras ever built. It was originally designed to use 14-in (35.5-cm) square photographic plates, each covering 36 square degrees of sky, but was upgraded in 2000 to use electronic detectors. Construction of the instrument began in 1939 and was completed in 1948. It has been used in many surveys and was responsible for the discovery of several large trans-Neptunian objects, including Sedna, Eris, and Quaoar.

The Palomar Observatory Sky Survey (POSS) is a photographic survey of the sky from the north celestial pole to Dec. -30°, carried out using the 1.2-m Schmidt telescope at Palomar Observatory and financed by the National Geographic Society. The original survey, POSS-I, completed in 1958, involved 936 pairs of plates 0.355 meters square with a field of view of 6.5°, each consisting of one plate sensitive to red light and one to blue light. A second survey, POSS-II, was started in 1985 from the north celestial pole to the equator using modern plates, and, when complete, consisted of 894 fields in blue, red, and infrared light. POSS II has also been converted to digitized form (i.e., the photographic plates were scanned), as the Digitized Sky Survey (DSS).

The Palomar Testbed Interferometer (PTI) was an experimental arrangement at Palomar Observatory, funded by NASA, to demonstrate key technologies for use at the Keck interferometer and, eventually, in future space-based interferometers. Near infrared radiation from a cosmic source was collected by three small telescopes located in separate buildings about 110 m apart and directed through pipes to a central building where the beams were combined. The instrument became operational in 1995 and was decommissioned in 2008. Its outstanding discovery was that the star Altair is extremely flattened due its rapid rate of rotation.