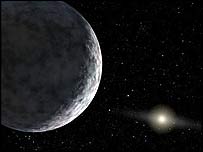 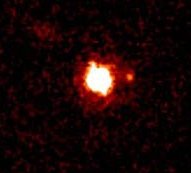 Eris and its moon Dysnomia.

136199 Eris is the largest known Kuiper belt object and also one of the largest known dwarf planets (along with Pluto) according to a new classification scheme adopted by astronomers on August 24, 2006. 136199 Eris, formerly known as 2003 UB313, is further classified as a plutoid (a dwarf planet that orbits the Sun further out than Neptune) and a scattered disk object – a type of trans-Neptunian object believed to have been scattered from the main Kuiper belt. Nicknamed "Xena" after the warrior princess in the TV series of that name before it acquired its official name in September 2006. According to observations published in October 2011, Eris about the same size as, or slightly smaller than Pluto. Initial measurements had suggested that it might be as large as 3,000 km (1,875 miles) across; however, the latest estimate suggests a diameter of 2,326 km (1,445 miles).

Eris travels in a highly elliptical orbit, sharply inclined at angle of 44° to the plane of the ecliptic (the plane in which Earth's orbit lies), with a period of 558 years. This high inclination suggests that the object was thrown into its present orbit by an ancient encounter with Neptune. It is also the reason that Eris wasn't discovered earlier – most searches for new objects in the outer Solar System concentrate in and around the ecliptic plane.

Eris averages roughly three times the distance of Pluto from the Sun. At the time of its discovery it was 97 AU from the Sun (more than twice Pluto's average distance) and almost at aphelion, but it can come as close as 5.3 billion km (3.3 billion miles). (Pluto's orbit ranges from 4.3 billion km to 7.4 billion km) Preliminary spectra indicate that its surface contains methane ice and may thus be similar to that of Pluto. For Eris to appear as bright as it does with a diameter similar to that of Pluto it must have an extremely high albedo, reflecting about 86% of light falling on it (compared with 60% in the case of Pluto). Of all the objects in the Solar System, only Saturn's moon Enceladus is known to be brighter.

The discovery was made by American astronomers Michael Brown of the California Institute of Technology, Chad Trujillo of the Gemini Observatory in Hawaii, and David Rabinowitz of Yale University using the Samuel Oschin Telescope at Palomar Observatory and the 8-m Gemini North telescope on Mauna Kea. The object was first observed on October 21, 2003, but the team did not see it move in the sky until looking at the same area 15 months later on January 8, 2005. The announcement of the discovery of Eris, in July 2005, came shortly after that of 2003 EL61, which is probably somewhat smaller than Pluto.


The moon of Eris

On September 10, 2005, astronomers at the Keck Observatory on Mauna Kea observed Eris with a new instrument that reveals details as precise as those seen by the Hubble Space Telescope; this enabled them to determine that Eris has a small moon in orbit around it. The researchers involved included the original discoverers of Eris plus the large engineering team at the Keck Observatory which made the observations possible. The discovery of the moon, initially known as S/2005 (2003 UB313) 1, then code-named Gabrielle (Xena's female companion in the fictional series) by its finders before being formally named Dysnomia, is important in two respects. First it enabled astronomers, in 2007, to determine the mass of Eris; it turns out to be 27% greater than that of Pluto. Second it offers clues to what happened in the early Solar System.

Three of the four largest known objects in the Kuiper belt – Eris, Pluto, and 2003 EL61 – are now known to have satellites. Such a large fraction of objects with moons suggests some common mechanism at work. One possibility is that the moons of Eris and 2003 EL61 were both formed from a collision between Kuiper Belt objects, much like it is thought the Earth's moon was formed from a collision between Earth and an object about the size of Mars. The moon of Eris at a distance about one tenth of that of the Moon from Earth, and based on the fact that it is about 60 times fainter than the primary, is estimated to be about 8 times smaller (assuming it has the same albedo).

February 1, 2006: Observations seem to confirm that Eris has a diameter of roughly 3,000 km – about 700 km more than Pluto. The measurements were by a German team using using the 30-m Iram (Institut de RadioAstronomie Millimetrique) telescope at Pico Veleta in the Sierra Nevada mountains. The new estimate was obtained by a standard method which involved measuring the heat radiated by the object and combining this with information about the amount of sunlight reflected off its surface. It carries an uncertainty of 300 km either way.