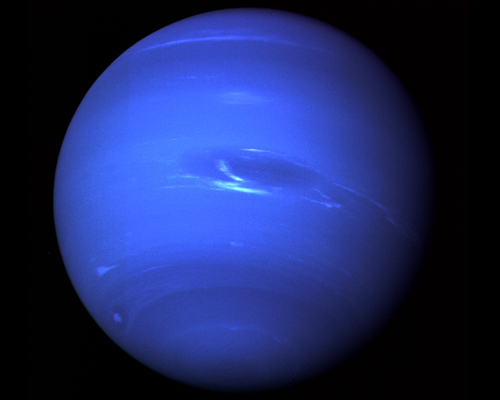 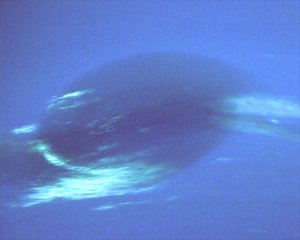 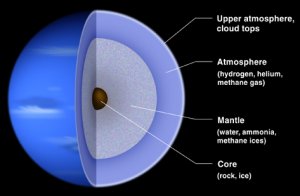 Fig 3. This Voyager image, FDS 11412.51, shows the three main arcs in Neptune's Adams Ring. The Liberty arc is near the lower edge of the image, followed by Equality and Fraternity above it. A fourth, fainter arc, called Courage, would be just ahead of Liberty, outside the field of view. 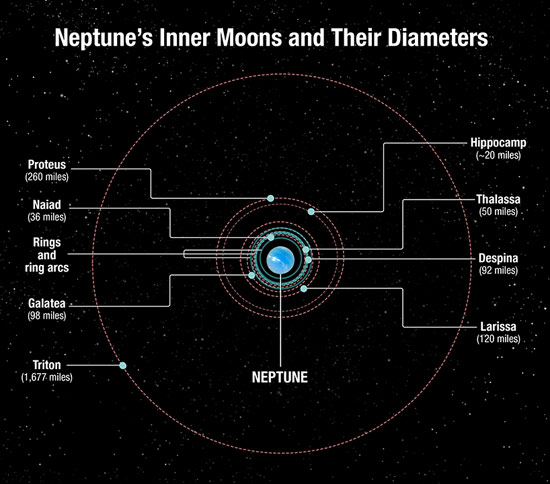 Fig 4. The orbital positions of Neptune's inner moons, which range in size from 20 to 260 miles across. The outer moon Triton was captured from the Kuiper belt many billions of years ago. This would have torn up Neptune's original satellite system. Triton settled into a circular orbit and the debris from shattered moons re-coalesced into a second generation of inner satellites seen today. However, comet bombardment continued to tear things up, leading to the birth of Hippocamp, which is a broken-off piece of Proteus. Therefore, it is a third-generation satellite. Not shown is Neptune's outermost known satellite, Nereid, which is in a highly eccentric orbit, and may be a survivor from the era of that Triton capture. NASA, ESA, and A. Feild (STScI).

Neptune is the eighth and outermost known planet of the Solar System. The dwarf planet Pluto, because of its elongated orbit, occasionally comes closer to the Sun for periods of 20 yr around its perihelion. Neptune is the most distant and densest of the gas giants. It is also marginally the smallest of the gas giants in the Solar System, after Uranus, although its volume is still 60 times greater than that of Earth and it is slightly more massive than Uranus. Neptune and Uranus are more appropriately referred to as ice giants because their composition is substantially different from that of Jupiter and Saturn.

Neptune was discovered in 1846 by Johann Galle and Louis d'Arrest following predictions by Urbain Leverrier. In fact, Galileo Galilei, as his notes reveal, had seen Neptune much earlier, in 1612 and again in 1613, but thought it was a star. The name "Neptune," after the Roman god of the sea, was first suggested by Leverrier and adopted internationally soon after.

Neptune's deep atmosphere extends 10–20% of the way to the center of the planet. At high altitudes it consists mostly of hydrogen (80%) and helium (19%). Increasing concentrations of methane, other hydrocarbons (including ethane, acetylene, and diacetylene), ammonia, and water vapor occur in the dark, warmer, lower regions of the atmosphere. Finally the atmosphere blends into the superheated liquid interior.

Neptune's blue color is mainly due to methane in the atmosphere, which absorbs red light. There is a noticeable difference, however, between the vivid blue of Neptune and the blue-green of Uranus, whose coloration is also the result of atmospheric methane. Some additional component must be responsible for Neptune's distinctive hue but the identity of this extra component remains a mystery.

Despite its great distance from the Sun and lower energy input, Neptune has the strongest winds recorded on any planet – three times stronger than Jupiter's and nine times stronger than Earth's. In 1989, Voyager 2 tracked a large, dark, oval storm in Neptune's southern hemisphere. This hurricane-like "Great Dark Spot" (Fig 1) was big enough to contain the entire Earth, spun counterclockwise, and moved westward at almost 1,200 km/h (750 mph). Winds blowing near the Great Dark Spot were clocked at up to 2,400 km/h (1,500 mph). (Subsequent images from the Hubble Space Telescope showed no sign of the Great Dark Spot. A comparable spot appeared in 1994 in Neptune's northern hemisphere but had disappeared by 1997.) Voyager 2 also photographed clouds casting shadows on a lower cloud deck, enabling scientists to visually measure the altitude differences between the upper and lower cloud decks. Another feature revealed by Voyager was a small, irregularly shaped, eastward-moving cloud, which scudded around Neptune every 16 hours or so. Nicknamed "Scooter" it is thought that it might have been a plume rising above a deeper cloud deck.

Below the atmosphere is a liquid hydrogen layer including helium and methane. The lower layer is liquid hydrogen compounds, oxygen, and nitrogen. It is believed that the planet's core comprises rock and ice. Average density, as well as the greatest proportion of core per planet size, is the greatest among the gaseous planets.

It probably has a rocky core covered by a icy crust, buried deep under a thick atmosphere. The first two thirds of Neptune is thought to be composed of a mixture of molten rock, water, liquid ammonia and methane; the outer third is a mixture of heated gases (Fig 2).

As in the case of Uranus, Neptune's magnetic field is strongly tilted relative to its rotational axis, by 47°, and offset at least 0.55 radii (about 13,500 km) from the planet's physical center. Comparing the magnetic fields of the two planets, scientists think the extreme orientation may be characteristic of flows in the interior of the planet and not the result of Uranus' sideways orientation.

Neptune has 14 known moons. All of the small, irregular moons that lie beyond Nereid have been discovered since 2002. See also Neptune trojans.

Neptune has a faint ring system of unknown composition and curiously clumpy structure for which there is yet no satisfactory explanation (Fig 3). Evidence for incomplete arcs around Neptune first arose in the mid-1980s, when stellar occultation experiments were found to occasionally show an extra blink just before or after the planet occulted the star. Images sent back by Voyager 2 in 1989 settled the issue, when the ring system was found to contain several faint rings, the outermost of which, Adams, contains three prominent arcs now named Liberty, Equality and Fraternity. The existence of arcs is difficult to understand because the laws of motion suggest that arcs should spread out into a uniform ring over very short timescales. Several other rings were detected by Voyager. In addition to the narrow Adams Ring, 61,000 km from the center of Neptune, there is the Leverrier Ring is at 53,000 km and the broader, fainter Galle Ring is at 42,000 km. A faint outward extension to the Leverrier Ring has been named Lassell; it is bounded at its outer edge by the Arago Ring at 57,000 km.

Earth-based observations announced in 2005 appeared to show that Neptune's rings are much more unstable than previously thought. In particular, it seems that the Liberté ring might disappear in as little as one century.

Neptune has been visited to date by only one spacecraft, Voyager 2, which flew by on 25 August 1989. Various other Neptune missions have been discussed but nothing is currently planned or being developed.