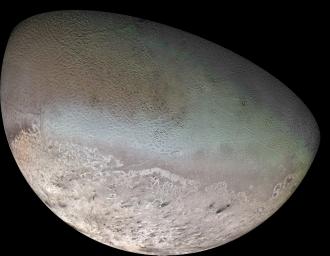 Global color mosaic of Triton, taken in 1989 by Voyager 2. The pinkish deposits constitute a vast south polar cap believed to contain methane ice, which would have reacted under sunlight to form pink or red compounds. The dark streaks overlying these pink ices are believed to be an icy and perhaps carbonaceous dust deposited from huge geyser-like plumes, some of which were found to be active during the Voyager 2 flyby. The bluish-green band visible in this image extends all the way around Triton near the equator; it may consist of relatively fresh nitrogen frost deposits. The greenish areas includes what is called the cataloupe terrain, whose origin is unknown, and a set of cryovolcanic landscapes apparently produced by icy-cold liquids (now frozen) erupted from Triton's interior.

Triton is by far the largest moon of Neptune and the seventh nearest to the planet. Triton was discovered in 1846 by William Lassell, only a few weeks after the discovery of Neptune itself, and has been visited by only one spacecraft, Voyager 2, in 1989, from which most of what we know about it has come.

Alone among big moons, Triton has a retrograde orbit, a feature it shares only with much smaller satellites, such as Jupiter's Ananke and Saturn's Phoebe. Since there is no way that Triton could have formed where it is with this backward motion, it must have originated elsewhere, perhaps in the Kuiper Belt, and later been captured by Neptune (if so, it would be the largest Kuiper Belt object known). A capture scenario would also account for the unusual orbit of Nereid and provide the energy needed to have melted and differentiated Triton's interior.

Because of its retrograde orbit, tidal interactions between Neptune and Triton drain energy from the big moon, causing its orbit to decay. In the remote future, it will either break up (perhaps forming a ring) or crash into the planet. The unusual nature of Triton's orbit, the similarity of the bulk properties of Triton and Pluto, and the highly eccentric, Neptune-crossing nature of Pluto's orbit suggest some historical connection between these two bodies.

Triton's spin axis is also unusual, tilted 157° with respect to Neptune's axis (which, in turn, is inclined 30° from the plane of the planet's orbit). This adds up to an orientation with respect to the Sun somewhat like that of Uranus, with polar and equatorial regions alternately pointing toward the Sun. This probably results in radical seasonal changes as first one pole and then the other moves into the permanent sunlight.

Triton has a very tenuous atmosphere similar to that of Pluto, with a surface pressure of about 0.01 millibar, composed mostly of nitrogen with a small amount of methane. A thin haze extends up 5 to 10 km. The temperature at the surface is as low as that of Pluto, due in part to Triton's high reflectivity, which bounces most incoming solar heat back into space. A 1997 occultation of a star by Triton provided evidence that Triton had become slightly warmer since the Voyager flyby.

Triton is slightly denser than Saturn's icy moons, suggesting that it is probably only about 25% water ice with the remainder rocky material.

Few craters are visible, indicating that the surface is relatively young. Almost the entire southern hemisphere is covered with an ice cap of frozen nitrogen and methane, and there are extensive ridges and valleys in unique complex patterns known as cantaloupe terrain all much of the surface, probably the result of freezing/thawing cycles. Resembling the skin of this type of melon, it consists of roughly circular dimples, 5 to 25 km across, separated by series of overlapping ridges. One idea is that the dimples resulted from internal explosions, another that they were produced by melting and collapse of the icy surface.

The most interesting and totally unexpected features on Triton are its cryovolcanoes (ice volcanoes). One of Voyager's images shows an actual plume rising 8 kilometers above the surface and extending 140 km downwind. Triton, Io, and Venus are the only bodies in the Solar System, besides Earth, known to be volcanically active at the present time (though Mars clearly was in the past). It's also interesting to note that very different volcanic processes occur in the outer Solar System. Eruptions on Earth, Venus, and Mars are or were of rocky material and are driven by internal heat. Io's eruptions, by contrast, are probably of sulfur or sulfur compounds, driven by tidal interactions with Jupiter, while Triton's eruptions are of very volatile compounds like nitrogen or methane driven by seasonal heating from the Sun.

On Triton there seem to have been at least three kinds of ice volcanism: