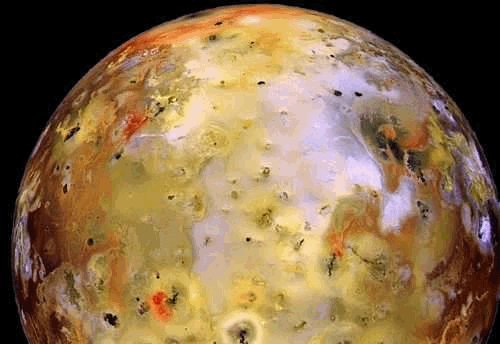 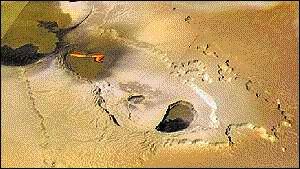 An active volcanic eruption seen on Feb 22, 2000, by the Galileo spacecraft. It occurred in Tvashtar Catena, a chain of giant volcanic calderas.

Io is the third largest and fifth closest moon of Jupiter, and the innermost and densest Galilean satellite; also known Jupiter I. Although similar in diameter and density to our own Moon, Io is radically difference in appearance. It is the most volcanically active body in the Solar System, its yellow and orange sulfur-rich surface peppered with hundreds of active volcanic calderas. Huge eruptions, accompanied by plumes 300 kilometers high, have been observed by the Voyager and Galileo spacecraft. The energy for all this activity comes from tidal interactions between Io, Europa, Ganymede, and Jupiter. The three moons are locked in resonant orbits such that Io orbits twice for each orbit of Europa which in turn orbits twice for each orbit of Ganymede. Though Io, like our own Moon always faces the same side toward its planet, the effects of Europa and Ganymede cause it to wobble a bit. This wobbling stretches and bends Io by as much as 100 m (by comparison, the highest ocean tides on Earth only reach about 18 m) and generates heat in the same way that repeatedly flexing a rubber band causes it to warm up (see tidal heating). Some of these hot spots on Io may reach temperatures as high as 2,000 K, compared with an average surface temperature of about 130 K, and are the principal means by which Io loses its heat.

Hundreds of volcanic calderas have been observed on the surface. Because the surface is continually being relaid, there are no visible impact craters. The surface colors of mottled red, orange, yellow, brown, and white are due to sulfur and frozen sulfur dioxide. The terrain consists mostly of flat plains rising to less than 1 kilometer with some mountain ranges up to 9 km high. Io's biggest volcano, Loki, is the most powerful volcano in the Solar System and consistently gives out more heat than all of Earth's volcanoes put together. Its enormous caldera, larger than the state of Maryland, is continually flooded with lava.

However, not all of Io's mountains are volcanic. Some appear to have been formed by uplift and thrust faulting, and, in some cases, may rise to great heights; Euboea Montes, for example, tops out at an altitude of 13 km. The sheer size and steepness of these peaks argue that the material underlying them is rock and not some form of sulfur. Images of Euboea Montes suggest that it formed from the uplift of a large crustal block, which caused a landslide that has left an enormous debris apron at the mountain's base. The debris flow is 200 km wide and contains an estimated 25,000 cubic km of rock – 10,000 times larger than the landslide that accompanied the Mt. St. Helens eruption in 1980. Only on the flanks of Olympus Mons on Mars have avalanches of this size been observed elsewhere.

As Io travels around its orbit, it cuts across Jupiter's magnetic field lines, generating an electric current. Though small compared to the tidal heating, this current may carry more than 1 trillion watts. It also strips some material away from Io which forms a doughnut-shaped cloud of plasma in Io's orbit. This cloud, consisting mostly of oxygen, sodium, and sulfur ions, emits strongly in the extreme ultraviolet but also radiates at wavelengths long enough to be detected by ground-based telescopes. Data from Galileo also indicate that Io may have its own magnetic field as does Ganymede. It has an iron core and a high-altitude ionosphere.