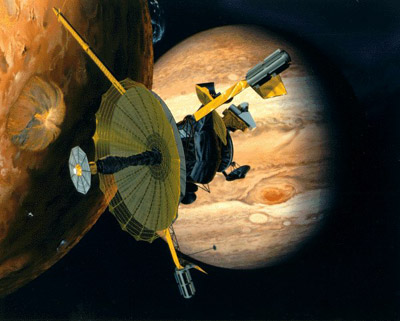 Galileo was the first spacecraft to conduct long-term observations of Jupiter and its moons from orbit and the first to deploy an instrumented probe to investigate Jupiter's atmosphere in situ. It was named in honor of Galileo Galilei, the Italian Renaissance scientist who discovered Jupiter's four biggest moons.

Galileo's six-year journey to the largest planet in the Solar System, which began on Oct 18, 1989 and reached its goal in Dec 1995, involved two gravity-assists from Earth and one from Venus. En route to Jupiter, Galileo made the first and second flybys of asteroids – Gaspra in Oct 1991, and Ida (discovering its tiny moon) in Aug 1993. Galileo was also the only vehicle in a position to obtain images of the far side of Jupiter when more than 20 fragments of Comet Shoemaker-Levy plunged into Jupiter's atmosphere in Jul 1994.

As Galileo drew near to the giant planet, it released a small probe (dry mass: 339 kilograms) which dropped down through Jupiter's atmosphere. This descent probe carried science instruments and the subsystems needed to support them and transmit their data back to the orbiter for storage and later transmission to Earth.

The probe consisted of a deceleration module and a descent module. The deceleration module included fore and aft heat shields, the structure that supported the heat shields, and the thermal control hardware for mission phases up to entry. A 2.5-m main parachute was used to separate the descent module from the deceleration module and to control the rate of fall of the descent stage through the atmosphere. The descent module included six science instruments: an atmosphere structure experiment, to measure temperature, pressure and deceleration; a mass spectrometer, for atmospheric composition studies; a helium abundance detector; a nephelometer, for cloud location and cloud-particle observations; a net flux radiometer, to measure the difference between upward and downward radiant energy flux at each altitude; and, a lightning and energetic particle detector, to measure light and radio emissions associated with lightning and high-energy particles in Jupiter's radiation belts. During its 57 min of active life in the Jovian atmosphere, the descent probe managed to spring some surprises for researchers, including the unexpected lack of water in the Jovian cloud tops.


the orbiter at Jupiter

On Dec 7, 1995 (the same day the descent probe was released), the main spacecraft went into orbit around Jupiter to begin its scheduled 23-mo, 11-orbit tour, including 10 close satellite encounters. A serious problem had arisen with the spacecraft during its interplanetary cruise: the planned deployment of Galileo's 4.8-meter-wide high-gain antenna had failed, forcing the use of a low-gain antenna with a much lower data transmission capacity. However, although this was a blow, it was softened by the skill of technicians on Earth who devised data compression strategies and other ways around the hardware limitations.

Galileo's two-year primary mission involved studying the planet's atmosphere, magnetosphere, and satellite system, encountering one moon during each orbit, and returning a steady stream of images and other data.

Following the completion of the primary mission in Dec 1997, Galileo began a two-year extended mission known as the Galileo Europa Mission. The first part of the extended mission, lasting more than a year, was devoted to searching for further evidence of a sub-surface ocean on Europa. During eight orbits of Jupiter, Galileo made close approaches to Europa of 200–3,600 km, enabling a camera resolution of down to 6 m. Following the Europa Campaign ("Ice") was scheduled the Perijove Reduction/Jupiter Water Study ("Water") and the Io Campaign ("Fire"). The mission was then further extended to 2001, and then beyond, to include additional flybys of moons before a final death plunge into Jupiter's atmosphere on Sep 21, 2003.

JPL (Jet propulsion Laboratory) designed and developed the Galileo orbiter spacecraft and operated the mission, Ames Research Center developed the atmospheric probe, and the German government was a partner in the mission through its provision of the propulsion subsystem and two science experiments.1