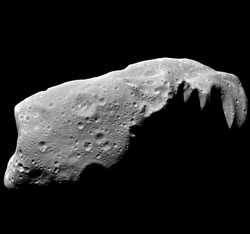 Ida, imaged by the Galileo spacecraft as it flew by in 1994.

243 Ida is a member of the Koronis family of asteroids. It was discovered by Johann Palisa in 1884 and named after the mountain on Crete where Zeus spent his childhood.

On August 28, 1993, Ida became the second asteroid, after Gaspra, to be encountered by a spacecraft when Galileo flew past it at a distance of 2,400 km and with a relative velocity of 12.4 km/s. The highlight of the flyby was the discovery (made in February 1994 when images stored on the spacecraft's tape recorder were finally transmitted to Earth) that Ida has a satellite, subsequently christened Dactyl. Ida's age is a puzzle. Its surface is heavily cratered suggesting that it has existed in its present form for at least a billion years, which predates estimates for the Koronis breakup.