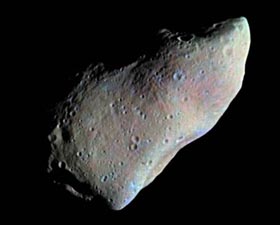 An image of Gaspra captured by the Galileo spacecraft, when it flew by the asteroid on its way to Jupiter on October 29, 1991. Credit: NASA.

951 Gaspra is the first asteroid to be seen close up when the Galileo spacecraft flew past it at a distance of 1,600 km, on October 29, 1991, en route to Jupiter. Gaspra is an S-type asteroid, a member of the Flora family, elongated and irregular in shape, and lacking any large craters, which suggests that it has a comparatively recent origin, most likely from the collisional breakup of a larger body some 300 to 500 million years ago. It was discovered by Grigoriy N. Neujamin in 1916 and named after a Russian resort and spa near Yalta, Crimea, that was visited by contemporaries such as Tolstoy and Gorky.